I am old now, a father and a grandfather. I lived a beautiful life, especially when I was young. I have accidently found this album. My grandchildren are coming to visit me soon, so I wanted to clean up a bit but when I found it I felt curious about what’s in it. When I opened it, I remembered a lot of adventures that I had with my friends. I am going to tell you one of my favourite ones.

When I was ten years old, my friends and I played in the woods near my house. It was the place where we spent most of our warm summer days. We were running around playing hide and seek, hopscotch… A lot of animals lived there as well, so we were friends with all of them. One day we went out to play. I always had binoculars with me in my bag because I loved to observe the animals. On our way to the woods we sensed something was wrong. I took out the field glasses from my bag to see what was going on. What I saw was terrifying. The woods were gone, so were the animals. We quickly ran there since we were worried about the animals. All the trees were cut off. It looked like a construction site with several bulldozers but there was no one there. We saw a tent nearby, so we decided to go in. In the tent I found a map. We followed it to the old abandoned castle. My friends and I went inside carefully. We heard unusual sounds, so we followed them. They led us to a dark room. We hid behind a pile of papers. I took out my binoculars and watched the person that was standing next to the desk. I widened my eyes when I saw who was there. It was a man with white messy hair. He had a crocked smile. The desk was filled with all sorts of papers, documents and drawings. We could hear little evil laughs coming from his mouth. He was planning a project. He wanted to ruin our woods. He was going to build a huge science lab. He would ruin all the nearby woods including ours. When we realised what had happened, we quietly ran back home. We had to make a plan to stop the scientist. After a few minutes of thinking, a brilliant idea came to my mind. My friends and I ran to the attic where my parents kept a huge wooden chest. I kept my Halloween costumes inside. We took out a few of the scary looking costumes and put them on. Our plan was to scare the scientist into thinking that the woods were cursed so that he wouldn’t ruin them. We went back to his castle to frighten him with our scary costumes. When we came to the castle it was quiet. We went back into the room from earlier. The scientist was asleep on his desk. It was really dark and we could barely see anything. I started walking loudly like a soldier and my friends followed me. The scientist woke up. My friends started to make weird and scary noises. The scientist got scared so he turned on his lamp. He could only see the shadows of our scary costumes on the wall. He looked like he just saw a ghost. It was hilarious. He screamed and ran out like crazy.

Thank Goodness our plan worked. Now when I think of it, I probably exaggerated a bit. I was just a child with a wild imagination, but now I’m grateful because I can watch my grandchildren play in the same old woods. 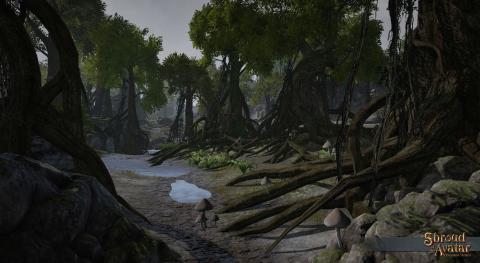