Once upon a time there was a girl called Millie. When she was little her father used to tell her stories. She heard lots of them, but her favourite story was “One Wish.” The story goes like this:

”Far away from here a small girl lived in a small town with her brother. They were happy. Near the city there was a big and beautiful forest. They loved to visit it. One day, when they entered it there were machines and people with electric saws who were cutting trees. The kids were devastated. They found out that it was the work of the authorities. They were so sad when they realized that there was nothing to be done to prevent it.

When Anna was in front of her house she heard her neighbors’ conversation . They were talking about a scientist who found a way to fulfill every wish, but under some conditions. She decided to find out more about him. Her neighbor told her that he lived in a small town, two days drive away. She decided to tell it to her brother. He thought about it and agreed to take the road to the scientist. They set off, passing by the meadow where the forest used to be. They saw a bear and a rabbit behind a rock, who asked them where they were going. After explaining to them what they were up to, the bear and the rabbit decided to join them. They were walking through grain fields, meadows and roads. They slept under a thousand of stars.

On the third day walking through the oak forest, a walnut dropped on John’s head. When he looked up, he saw a squirrel. She asked them: “Where are you going?” Anna explained. The squirrel then asked: “Can I go with you? My home will also be destroyed.” So she joined them, too. They slept under the bright sky and a thousand of stars.

After five days of walking they came in front of the town. From the distance they were looking at this small but a pretty place. When they entered the city, they wondered where the scientist named Olly lived. No one knew. They were wandering the city until a gentleman asked them: “Who are you looking for?” John and Anna said: “ We are looking for Olly.” The gentleman replied:” So, you are looking for Olly… He lives in an old gray house.”

After a few minutes they found his house. They entered it. After introducing themselves, they asked him to help them stop the demolishing the woods and make trees grow again. The scientist answered: “I will help you but your request is difficult to fulfill, so I will need your help. You have to go to the neighboring village which belongs to the Indians and bring me the greatest diamond you can find.”

So they went, dressed up like Indians. After a long walk they finally came. They were tired and exhausted, so they went straight to the tribal chief. As they didn’t want to steal anything, they explained the to go home not to worry since their wish would come true. So they did.situation. The chief approved of giving the diamond since it would save the forest, and the nature is important in the Iife of an Indian. They were so delightful and they brought the diamond to the scientist. The scientist took them in a special room and and loudly the machine processed it and fulfilled it.

They couldn’t believe what they saw. The scientist told them to go back home and their wish would be fulfilled. So they did.

When they came home nothing seemed odd to them at first. But, when they came to the place where there were only a meadow and cut trees, they found a beautiful forest the way it used to be once. All the animals got their home back . The children could play there and everybody was happy again.”

This was Millie’s favourite story. 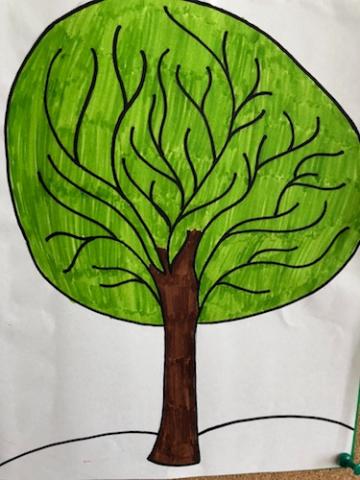