CHILDHOOD IN THE FOREST (To my little newborn cousin Lantea…)

Old man Mark is sitting on his chair now. He is looking at the photo album. He is turning the pages: the first, the second, the third…..

Suddenly, the old man catches the sight of one beautiful photo. It is the photo of him when he was a little boy. He was in the wonderful forest. He was swinging. He starts recalling his childhood memories.

When he was a little boy he liked the forest. He and his young sister Abigail liked to play there. In the forest they found their best friends: Leopold the bear, Adam the rabbit and Maya the squirrel.

One day, while they were playing in the forest, they found an old map. Mark took it in his hands.

“So, that is probably a treasure map!” Leopold exclaimed.

Everybody was very excited.

Mark took his binoculars. Abigail put the treasure map in her backpack. They started to walk south-west. They passed the old castle, across the high mountain, through the big forest and finally ran across the railway.

Mark took his binoculars and looked through them.

They all started running. They entered the house. They saw a real treasure chest. They opened it and they were very surprised. There was no treasure. Inside there were beautiful, colourful toys and costumes. They took the chest and went back to the forest. They played there every day.

Leopold found the pirate costume. He imagined that trees were pirate ships. That was why he often climbed trees.

Mark found the dragon costume. Adam found the knight armour. They played together. Adam had to save Abigail’s doll from the evil dragon.

Maya always wanted to fly. She wore a small superhero costume and jumped up and down from tree branches.

Abigail found a feathered headdress. She put it on her head, cheerfully jumped and pretended she was a Native American.

Happy friends learnt just then that the toys are their real treasure.

The kids grew up, but the costumes remained the same.

Even the little Abigail was all grown up.

Abigail got married and had two children. She lived in a little house near the forest.

Mark went to college in a big city. He learnt a lot. He became the best scientist in the world. Every day, he invented new inventions in his laboratory. He forgot his sister, his old friends, toys and the forest. Glory and money were the only things important to him. He wanted to build a weather factory. He wanted to produce black clouds, lightning, thunder and strong winds.

To build the factory, he needed a lot of space. He decided to destroy the same forest he had played in before. He brought the big machines into the forest. They began to pull down the trees. They pulled down Maya’s tree. She was very sad.

She decided to find Adam and Leopold. They were also left without a home. Together they left the forest. They were walking when they saw the house. Two little children were playing in front of the house and Abigail was playing with them.

They all shouted, “Abigail!”

They hugged her. Then they told her how they were left without a home. She decided to help them. She went into the house and brought the chest.

Adam, Maya and Leopold dressed up in their costumes. Abigail’s son and daughter also put on the costumes. Then they left for Mark’s laboratory. They wanted to remind him how they played in the forest. They came to the laboratory and opened the door. Maya tried to fly again, but she was clumsy. She fell on the girl’s feathered headdress. All of the sudden, they all bumped into each other.

When Mark turned around, he saw a weird-looking creature on the wall. He thought it was the forest ghost and he began screaming. The kids were scared and ran away.

Mark decided not to destroy the forest anymore, because he was very scared of the ghost. The legend said that if you had seen the forest ghost, you would have had bad luck for the rest of your life. The next morning the machines were gone. Mark decided to live quietly in his laboratory. He grew old, but he never pulled down a tree again.

Now he is sitting on his chair. He is putting down the photo album and walking to the door. Maya, Adam, Leopold, Abigail and his nephews are standing in front of the door. They all go to the forest. Mark puts his nephews in his old swing. He is swinging them forward and back, back and forward... Abigail takes the photo. 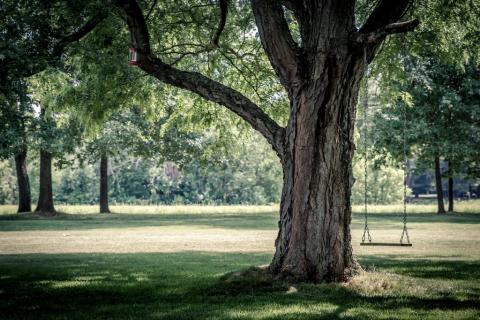