A short story with the happy ending

Scientist John was working on his invention. At one point someone rang at the entrance door. "Great that's the part I need to finish my invention" John thought. When he opened the door he saw a letter on the floor. Unfortunately, that was not what he expected. He picked up the letter and saw that there was no sender's address. He realized that this wasn't the letter delivered by the postman.

There was a written address in the letter where he and that sender should meet. Of course, he didn't even know what it was. Still, he decided to go to the address written in the letter and check what it was all about. Before leaving, he told his kids, Kim and Jonathan, that he has to go to one place, but he would be back soon. He sat in a car parked in front of the house and drove to the address indicated in the letter. His children waved and went to look for toys to play outdoors in the clear air.

Above the house on the hill there was a beautiful forest from which the noise of the working machines was heard. They took the binoculars to check what were they doing. Wood cutting machines cut trees, others put trees on railway wagons and transported them. The forest where the animals and birds are inhabited was disappearing in front of their eyes.

John came to the specified address, sat on the bench an waited for some time. At one point, a black SUV with tinted glass arrived next to him. Two masked men came out and without any explanation put him into the car. Secret foreing agents took him to an unknown direction and for months they used his knowledge of the invention he was working on at home. He couldn't communicate with anyone so he asked them to bring him a photo album of his children. When the project was over they returned him to the same place they took him from.

He returned home and hugged the happy kids... 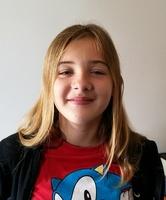