A scientist, kids and a magic forest

A scientist, kids and a magic forest

This happened once upon a time, long time ago, far, far away, when humans were created and the world was young. Humans wanted to explore and humans wanted to know more, but only some persons knew more. Today we call them scientists. Remember this part because it is very important.

Let’s begin with our story. The story begins in a forest. That forest wasn’t any ordinary forest, it was magic. It was magic because humans could talk with animals. There existed only one rule. That rule was that kids could speak with animals, just kids, and adults could not. So they lived happily, until one day when everything changed.

In the night came the lumberjacks and they cut all the trees. They needed the trees because they wanted to sell them. Later, when the sunrise came the kids – well, actually it was a girl and a boy – saw the animals, but the animals were sad. Girl asked “What is wrong? Why are you sad?” The bear and his friend pointed to the hill. They climbed and they saw nothing. They didn’t see trees and fruit; they saw only what the lumberjacks did. Lumberjacks’ job was to cut all trees and they completed their job.

The kids left. When they came back home, they didn’t say hello, they just ran to the attic – they had to find something. In the attic they searched their old toy chest. They were looking for something they remembered playing with once. In the toy chest there was a costume of a dragon and many other things. When they got down from the attic, they saw their old grandfather. He was watching some photos and the kids told him the story about the magic forest and they asked him “Can you help?”

The grandfather stood up from his comfortable armchair and he went to a bookshelf and he took a book. He opened the book and he took a paper scroll and gave it to the kids with a couple of words. Those words were “Help the forest.” Kids looked at the paper; it was a map. They asked him “What is the treasure in this map?” and the grandfather answered “A scientist who will know how to help the forest”. So the kids took some equipment and they started their journey.

Suddenly they saw a bear and a rabbit and they joined them on the trip. When they finally came to the scientist, he was working on something, so they scared him because the scientist saw at first only their shadow which was scary. They talked and talked, well… it was a long conversation. The scientist agreed with them, but in his smile they thought they saw something evil.

The scientist went to his laboratory and he created a light bulb which could help the forest, because it made the trees grow much faster. That light bulb really did help the forest. The trees grew back quickly. But many years passed and the forest lost its magic power. Do you know what this means? If you don’t know, then I will tell you. This means that the children were right after all, about what they thought they saw in the scientist.

Maybe you were in that forest. I was and I remember this story, like it happened yesterday. 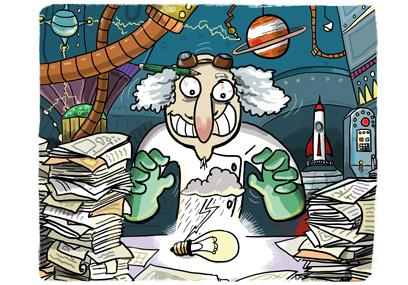