1    Before I can begin this story, I have to tell you a little bit about an island called Nowhereland. To get to Nowhereland, you have to ride a private train, and it costs a lot. In the north, you can  find a castle of a grand family Normand. On the west of the castle, there are woods known as Hoot-woods, because there are lots of owls there. For some reason there is a parking lot south of the castle, so that anyone that lives in Nowhereland  can park their cars there. Nowhereland has its own lake, called Hogget. Nothing special, just some boats passing by everyday, not paying attention to the island, that's why the island is a secret. South of the Hoot-woods is a part where the trees were destroyed, and there was an X on the map. The X will be important later. South of the destroyed part is a camp.

2    Now that we are done with the introduction of the world, it's time to introduce some characters. I want you to meet our story heroes, Andy, Amy, a bear called Gary, a squirrel called Squirely, and a rabbit called Bob. These friends always like to play, no matter where. They liked playing Indians and cowboys the most.

3  Squirely had a tragedy happened to him. Some bad people destroyed the south part of Hoot-woods, which was his home.

4     One day, the friends were playing in the woods, when Amy's grandpa called.

5      He wanted to look at old photos of himself. He was a very vain and proud man... well, at least proud of himself. Andy joined him.

6       While flipping through the photos, Andy spotted a weird picture. It wasn't Amy's grandpa, it was a weird- looking man, maybe a some sort of a scientist. He looked crazy, probably because the photo was showing him in a process of creating a weird cloud with lightning coming out of it. He had a lot of papers on the table, and some other scientist stuff. Behind him were all kinds of stuff, from rockets to planets. Andy quickly snatched the picture, to see it better. When he flipped the photo there was something written behind . Andy could barely read it. It said „Tuesday, May 15,  Hoot-woods will be gone!“ „Oh no!“ Andy was thinking ''That's tomorrow!  What are we going to do?“ Andy saw a map of the Nowhereland, and an X on the map. He quickly ran out of the house. His friends followed him, yelling 'Why are you running? Stop!!“ Andy stopped at last. He told everyone what he saw and read. Everyone was in shock, but Squirely was particularly angry. Squirely furiously said 'I'm going to get this guy. He is not going to destroy the rest of Hoot-woods. I'm going alone, don't follow me!', and ran off quickly.

7        Nobody knew where this scientist lived, but they guessed that the X marks the lab, so they followed their friend. Squirely stopped for a second, and looked behind, 'No sign of anyone...', and he continued.  So did his friends. When they arrived near the X, Squirely noticed them and asked „Why did you follow me?“ he continued, 'I said that I will do this on my own'. I'm getting rid of this guy once and for all!“ But Andy had a better idea. He said „What if we scare him so that he just leaves this island?“ Everyone agreed, Squirely too. They wanted to see where the X leads to, so Andy took out his binoculars. They saw a lab, and the scientist.

8      Everyone quickly ran back to their toybox, because they knew that they will find something there to scare the scientist with. When they came back, they put on some funny costume. They created a scary creature. Gary was front legs, Amy backlegs, Andy head, Squirely head and Bob was a scary hat. When they entered through a huge door, they saw everything exactly as it was in the picture Andy saw. 'It looks like he was planning on creating a poisonous cloud to destroy the entire Hood-woods,' friends said. At that moment ,the „monster“ saw the creature and started screaming like a maniac. The scientist was scared to death. He was crying and saying, 'Please don't hurt me, I'll do anything, just don't hurt me!“ „Leave this place immediately, and destroy all your plans with you!“ „OK, OK, just don't hurt me!“ He did as he was told to, packed his things and burned his plans. Then he ran out in panic and nobody has seen him ever again. The friends started celebrating, and no one was happier than Squirely. 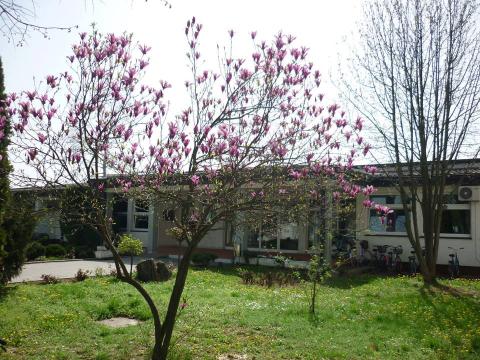