One sunny day the grandpa was flipping through his old photo album. He remembered the time when he was young.

The memories brought him back to the time when he was eleven years old. He wasn’t old and bald then. He had beautiful black hair and he was happy.

There was one special photo which was the most beautiful to him, the photo of the woods. He played there with his friends when he was very young.

His grandchildren were playing in the same woods, pretending to be heroes, researchers and conquerors, just like him.

His grandchildren were also exploring, but not the woods. They were exploring their attic.

They found one big box and thought it was a hidden treasure box. Unfortunately, it was just a big toy box. Lots of toys were hidden inside: a ball, an airplane, a robot, a strange flag, a very big bear, a squirrel with a big tail and a small white rabbit. They touched the animals and they came alive. They jumped out of the box. Wow! The children were very surprised.

Together with their new friends, they continued to explore the attic. At the bottom of the toy box they found a treasure map.

There was everything on the map: a castle, a mountain, an owl, a train, a bicycle, a tent, a snake, a ship, the woods ... But there was also a marked place for the treasure. They recognized the place: it was their woods!! They decided to go there and look for treasure, but they didn't find it.

One day in the woods they met a strange man, an unusual scientist, and they wanted to know what he was doing there. He said that he was some kind of a scientist, a scientist-wizard in fact. He wanted to do something special for the world, like to create small clouds that produce electricity or make rockets for everyone to fly from planet to planet, but his biggest wish was to make the largest bridge over the Atlantic Ocean.

Unfortunately, he usually did some ordinary “experiments” like other wizards: a rabbit turned into an owl or a stone into a flower.

“Can you make snow to fall right now?”, asked the children.

“Of course!”, said the scientist.

And the snow started to fall in the woods.

It was some kind of magic snow, white and silver.

Everybody was very happy, the children and their friends started to dance and jump in the snow.

They played there all day long. They built a lot of snowmen, they had snowball fights and laughed a lot, but then they had to go home.

The next day they went to the woods and saw the cut down trees. They were very upset and sad. They cried a lot.

All animals in the woods lost their homes, because bad people destroyed the woods, the most beautiful place on the Earth.

The children decided to find out who cut down the trees. They climbed the mountain and watched with binoculars what people did to the woods.

And they saw something strange. The scientist was there with woodcutters. They were talking about something. The rabbit with his big ears could hear what the scientist and other people talked about.

They talked about a very big bridge and the Atlantic Ocean.

Suddenly, it became clear. It was the scientist who did it to their woods.

“I can’t believe it! We trusted him, we thought he was a very good scientist!”, said the grandson.

“He destroyed our woods! Maybe he did something worse than that, maybe he killed some animal?!”, said the granddaughter.

“He is the most dangerous person, we have to do something!”, said the rabbit.

“Are we heroes?”, the grandson asked.

“We need heroes in a dangerous situation like this!”, said the grandson.

The children and their friends went home. They put on scary heroes’ clothes and went to look for the scientist.

They decided to scare him. They waited until midnight and then started to scream and pretend to be ghosts. Other animals from the woods helped them.

The scientist was very scared and he ran away, somewhere far, far away.

And no one ever saw him again. 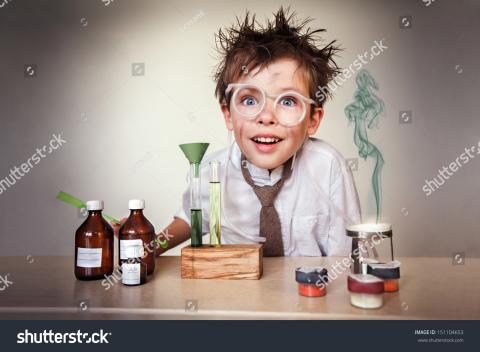