An old man sat down with a book in his hand. He opened it and smiled. As he looked at his grandchildren he started to read.

"Once upon a time, in a small house somewhere far away, lived Jacob and his little sister Jane. They had friends, but not just any friends. Their friends were woodland critters. They were Squick the Squirrel, Hop the Bunny and Claw the Bear. The critters lived in a whimsical forest near Jacob and Jane's house.

One day Jacob took his binoculars and looked at the forest. Slowly it was being destroyed. They were all shaken by what they saw. By the time the night came the critters had no place stay. Jacob frowned and said 'I bet it was that mad scientist, Doctor Greg! He has always wanted to destroy the forest!' Jane nodded and asked 'How do we get to him? We need to get our friends' forest back!' Jacob shrugged and didn't know what to do. Squick said happily 'There must be something in your attic that can help us'. The critters, Jacob and Jane rushed to the attic and there they found a chest. They opened it and in it they found toys, clothes and a map. The castle of the mad scientist was to the north. They would have to go through the Mountains of Doom.

They all got dressed up in the clothes they had found. Jacob put on a dragon suit and took a broom. Jane put on a dress with a sun on it and a crown made of feathers. Squick put on a mini batman suit. Hop got dressed as a brave knight and Claw dressed as a pirate. They soon headed to the mad scientist's castle. They climbed the Mountains of Doom. On the top of the mountain they found a potion. On it there was a label saying 'The Potion of The Forest'. Jane took it.

They didn't understand why the mountains were called the Mountains of Doom until there was a massive storm. There was a lot of rain and thunder. They ran down the mountain as fast as they could. Luckily, nobody got hurt.

Jacob stood in front of the door to the castle. Jane and the critters were standing behind him. He knocked on the door and it opened. They walked in and saw the Doctor was doing something at his desk. Jane got on Claw's back, Jacob grabbed Claw by his waist and bowed a bit. Jane opened her umbrella and Squick hopped on top of it. Claw put the dragon head that Jacob was wearing on the tip of the broom. Hop was sitting on the broom and keeping the head stable with his “sword”. When the Doctor turned around he thought he saw a real dragon, but he only saw the shadow of Jacob, Jane and the critters. The Doctor was so shocked he fell on his back. Jacob quickly ran to tie him up. Jane looked on his desk and saw a paper saying 'Potion - The Forest' she grabbed the paper and went to Jacob. Jacob asked 'Tell us, old man, how do we get our friends' forest back?' The Doctor just laughed and with an evil grin said 'No way, hehehehe...'. After a few more questions they realised they really couldn't get it back, or so they thought. They went back home.

Then they came to the forest, sat down and looked around. Jane looked at the paper she took from the Doctor. She got up and spilled the potion on the ground. A few moments later the forest regrew. They all took off the ''armour'' they were wearing and started playing in the new forest they created.“

The old man closed the book and kissed his grandchildren's foreheads goodnight. 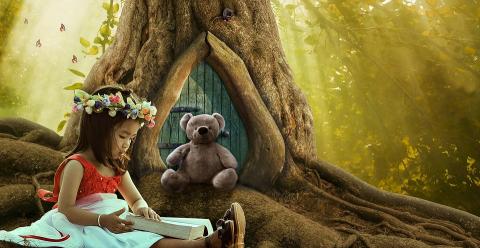