How Friends Saved the Forest

Today my friend Fox lost his home. I read that in the newspaper. Men with a crane came and completely destroyed his home. The forest was amazing, but now it is destroyed since they will build a highway there. On May 10 2018 they will start building the highway because the city Chief went bankrupt.

GRANDPA: "It will be awesome if Albert the scientist could make something that can bring the forest back. Hmmm... But if you want something from him you need to give him the completed puzzle. I don’t have three parts that I lost somewhere in the basement.

DYLAN: “Maybe we should help Fox.”

REBECCA “Can you see him?”

They tried to find the Fox in different ways, but there was no fox. They called and searched for him, but there was no Fox. The even dressed in funny clothes to make him laugh, but the Fox didn't come. They got bored and went inside.

SQUIRREL: Do you guys still remember the Fox?

EVERYONE “Of course we do.”

RABBIT: "Do you know where he is?"

They asked Grandpa about their friend Fox, but he didn’t say too much. He just give them a map to lead them to Albert.

They looked at the map, but they didn’t understand much. They just knew they needed to go to a castle. The note was dusty so they didn’t see they needed the 3 puzzles. They were just following the railroad track  because they were thinking it was the easiest way.

They made it to Albert, but then he said: “I need it first!”

They didn’t understand him at all. Then they remembered the puzzles. They came back home and searched for the three puzzles in the basement. Everybody was looking at different corners of the basement. The Rabbit found one in his corner and Dylan found one, too. But the third puzzle wasn’t there. Everybody  just kept looking. While Grandpa was looking for his drink he saw one puzzle in the corner. He come into the basement and said: “BAZINGA! I got it, don’t worry”.

Friends are going back to Albert. They were on half of their way, but then they lost the Bear and the Rabbit. They were following the railway track. Every 5 minutes a train went by the bear roared.  Five minutes later they heard the train and the roar. They were following the roar when they forgot where it was coming from. Some time after they found the Bear and the Rabbit and continued to go to Albert.

When the found Albert they said: “We got the puzzles. Now, give us the poison to return the forest.”

REBECCA: “Ok, we will take it anyways.”

They left Albert telling him to make the poison. They decided to find the Fox. They asked Grandpa where the Fox is. After they found him they told him good news. The Fox was really happy and gave them a big hug. They didn’t tell him that they will maybe fail. They were all depressed for 7 days. Albert was giving his best to make the poison. First he wanted to make the poison, but he created a dinosaur that looked very weird. And he's affraid of dinosaurs! Then he tried again and again. He was working all night. Until he made it!

RABBIT: “It’s 9 May tomorrow. They will start building the highway.

Albert told them what to do to use the poison the right way.

ALBERT: “You need to pour the poison to all the trees.

So they poured the poison like he said and they slept in Fox’s broken house.

It’ 10 May. The day. Grandpa tried to keep them away from the forest. When friends and the Fox woke up they ran up to the forest and they saw an amazing thing. The forest like it was before! When the Chief and his workers showed up they cancelled destroying the forest because this time it was too beautiful. They built the highway in a different place. The friends, the Fox and Grandpa made a party in the forest and celebrated. This is how  Friends Saved the Forest. 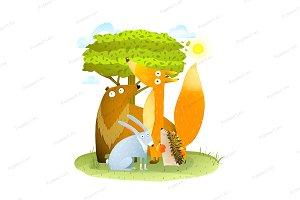