I am telling you my story, the story that I thought about a lot. It is special to me, firstly because it is my first story and secondly, because it shows us how to live our lives the best possible way.

Today I am telling you my first thoughts about Grandpa and his last goodbye. Maybe it looks like I am trying to make this sad, but that is not the case. If you have not noticed, my Grandpa decided to leave this world behind. He always had the feeling of expecting something and let me tell you, everything that he said was true. So he predicted that he was going to go, but he always said ‘I am here to teach you the things about life that no one will tell you but me’. Again, he was right! So, to honour him, I am telling you our story.

Before he predicted his future, he acted strange. For several weeks he only read his book. His book had a lot of pictures. He always laughed while reading it. I secretly spied on him while he was reading it. It was actually fun to see him remember his old days. He always said those were the best days of his life. He loved to play football! In his book there was everything, from tears to happiness! So I decided to re-tell you his story my own way, like he read it to me! My Grandpa always dreamed of getting back in the past, you know, to live the old days again. So, one day he met a scientist who decided to help him get there. After a lot of failures, they did it. They magically got back in the past. At first the scientist got scared because he did not expect them there. They were my Grandpa John and his friend Elizabeth. The scientist stayed quiet. He wanted them to find the truth by themselves. The truth is special, you’ll see it in the end.

After a while Elizabeth and John found three new friends, the bear called Teddy, the bunny Fluffy and the squirrel Orange. Weird names, you would say, but I think they are precious. They knew exactly what they were looking for! It was a map, a map that showed the way to the most precious treasure! After a lot of trying they found it. They were really excited and thrilled. After all that work they decided to play in a forest! John, Elizabeth, Orange, Fluffy and Teddy played all night. But after a lot of fun Orange got lost. They were all really sad, so they started looking for him! They did not find him, but Orange found them. But when he saw them, Orange got really sad because he saw the forest they were playing in. The difference was that there weren’t any happiness, trees or kids there. After a while, when Orange calmed down, they played again. This time they wore different costumes. They were having the best time ever, but it all had to end! After hours of playing they put all of the costumes in the treasure box! But something was different. Orange, Fluffy and Teddy fell asleep, they looked like toys, sleeping. Elizabeth and John looked into each other’s eyes and started crying. They knew what was going on. ‘Those friends were only toys and nothing else’ John said, but Elizabeth added ‘No, you are wrong! They were our best friends, the ones that we should never forget! They helped us a lot’. John became emotional and he added ‘I am so sorry, Elizabeth, you are right! They taught us a lot.’

They found the treasure. Childhood is a treasure and we should never forget that! 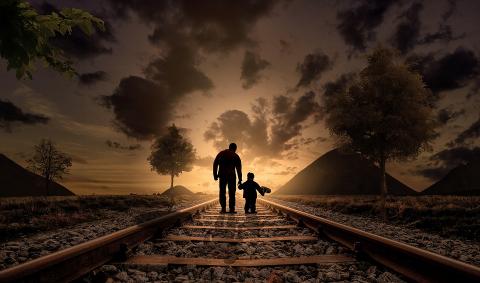