Once upon a time, there was an evil scientist who hated everyone around him. One day he said: “I shall take down these woods and there will no more little animals and bugs.” …

Meanwhile, in one old house, the children were exploring an old attic with animals and they found a box. The children opened the box and found cool things like: toys, old collected napkins…

At one moment Linda found a map. Then Leon said: “Lets go, sister, adventure is waiting for us!“ They packed the stuff and got out for a big adventure.

Once they were walking, they saw something weird happening in the woods. “Oh, no,“ said Linda. “There are a lot of machines for securing trees!“ said bunny in fear.

The squirrel was very sad, but she had an idea to stop this. “Listen, this is gonna be over, do you remember those costumes that we found in the attic?“ Leon already knew what the squirrel wanted to say, so they hurried up to the old house.

They dressed up so fabulously and fancy that I am sure they will one day win a Halloween contest. “TO THE LAB!“ said the bear.

They found the lab and sneakily got in. The evil scientist was looking at postcards. Then Leon said: “On the count of 3, we will begin making noises and show ourselves!“ The bunny counted to 3 and the scientist was scared to death. While he was running, he broke the potion that he made to take down the forest. The machines stopped and the trees grew in 5 seconds.

Everyone was happy and after that, they played in the forest.

The old men Leon was sitting in a chair, looking at the photo album, and he said: “Those were good times.“ 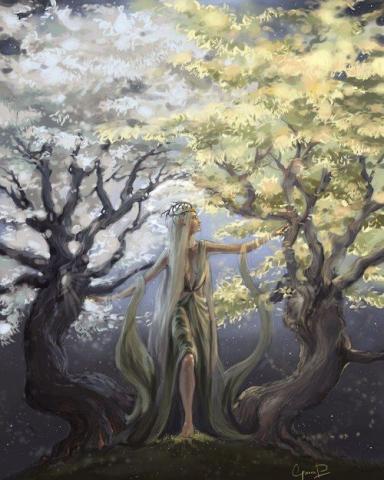