In a small house, in the middle of the thick forest, lived a happy old man. He lived alone, but he was not lonely. Merry forest animals kept him company every day. His sunny garden bloomed with life. In every corner of the flower garden and vegetable garden there was a creature that crawls, howls or squeaks. A hedgehog was hiding behind the rain water barrel, a frog was camping under the lettuce, nightingale was singing on the blossomed cherry tree and squirrels were hiding nuts in the hollow tree. Some shy deer were hiding timidly in the forest. There was not a forest animal that did not come at least once in a few days and all of them behaved unusually friendly to each other and the reason for all this was the old John himself. His favourite pastime was to retell how his friendship with the forest animals started. He slided a photo album and slowly flew into thoughts of the past...

That day, he remembered that he was exploring the secrets of his old grandmotherʾs attic with his friend Jane during a boring and a rainy afternoon. They explored excitedly all the corners of the attic, walking among dangling cobweb and sneezing from dust. Between the old furniture, rejected clothes, old tools, they saw a wooden chipped chest just like in the pirate films. ʺ What kind of treasure is lying there?ʺ they wondered. While their hearts were beating excitedly , they tried to open the rusty chest lid. When they opened, it showed them their long hidden secrets. They curiously started taking out robots, balls, aircraft models, Halloween costumes… There were memories of an entire childhood. They took out things one by one and finally they discovered an old the map.

There was not much to think about, because they immediately realized what was the map showing . It was a map of the forest that was a favourite destination for all generations. They were agitated when they saw the cut trees marked with a large red x. As soon as the rain stopped, they went in a search of an x sign from the map although it was dark outside. As they slowly went out into the dark forest, they heard the noise of the machines. While they were running away from the machines, forest animals went to John and Jane looking for their protection.

John looked through the binoculars and he saw a treeless hill. Machines were cutting the trees and putting them in the old castle. Quietly, followed by forest animals who ran in front of the machines,they came to the walls and looked out of the window.

What they saw was scary. A mad scientist Jack, surrounded by a bunch of his dangerous test tubes, was studying the settlement plan. John quickly realised his intentions - he wanted to cut the forest and build a luxurious settlement on its place. They went back to their grandmotherʾs house and put on their costumes. There became a pirate, an Indian, a superhero, a dragon and a knight .

So they returned to the castle and played with shadows in front of the window of Jackʾs laboratory. They were making a tremendous noise,while snorting and howling and the moonlight was reflecting strange shadows on the wall. The shadows looked like dragons and mythology creatures. Jack fell off the chair and then jumped screamingly up and down, pulling the little hair he had on his head. He thought the forest had turned against him. Tortured with unclean conscience, he escaped and they never saw him in that area again.

The animals threw an amazing party with fireworks and dancing while John and Jane were the honored guestes. It was just a beginning of a wonderful friendship and finally their home was where their hearts were. 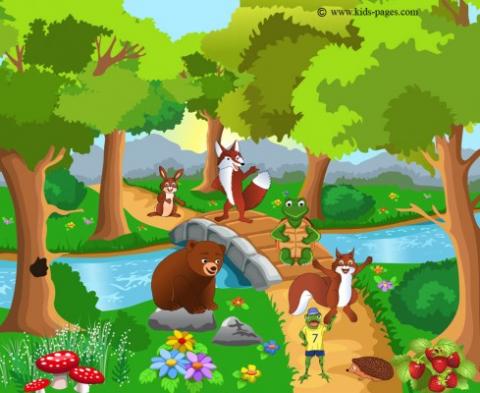