There was a Magical forest that people didn't know about. Only children could see the magic. But one day Dr.Leaf discovered the forest and ruined it . All animals ran for their lives. Pax was a fox that loved his home but got was so scared that he decided to leave. A little squirrel named Stacy went to new friends. She asked for help. There was a girl and a boy . Their names were Lizzie and Scott . Fluffy and Brownie went with Stacy. They told everything to Lizzie and Scott who had an idea. Scott's grandpa kept old costumes in his attick. Scott looked through a pair of binoculars and saw his grandpa looking at an album. So they sneaked in the attic and put on some costumes. They were ready to bring the forest back to life . On the bottom of the chest with costumes they found a map . They could see Dr.Leaf's secret cave and the ruined forest . ,,How did this get here?“ – asked Lizzie. Nobody knew. They were ready to set off to their adventure. While they were travelling Dr.Leaf was celebrating his victory because he thought he ruined the magic . He was so happy not knowing what would happen next. ,,We're almost there !“ – Scott said while gasping for air. They were in front of Dr.Leaf's cave. They thought that there would be traps, but suprisingly there weren't any. They carefully entered the cave and saw Dr.Leaf planning and celebrating. They had an idea. They made a giant monster puppet out of the remaining costumes. When they turned on the light and started to growl the puppets' shadow looked like a scary monster. Dr.Leaf screamed and accidentally pushed the big red button for SELF DESTRUCTION. The kids and the animals hid into Dr.Leaf's rocket and flew away. Dr. Leaf ran outside and his cave was destroyed . The magical forest started growing again and one could hear its residents cheering and laughing again. The Magic is always here, we are all magical, maybe somebody doesn't see the way we show it, but it matters that it's here and that it's special. 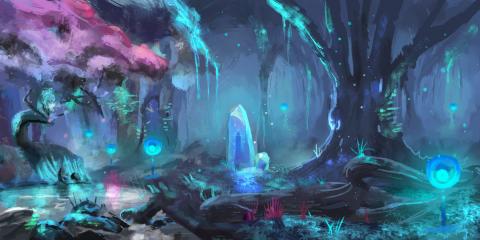