The Magic of Stories

A ray of light shone through the attic as the creaking signified that the door was opening. "Jane, did you find Grandpa's old photo album he asked you to get?" Sam glanced around the room to find his younger sister by a large chest. "No, but I found something a million times better. Can you help me open this thing?" Sam hesitated for a second before walking to the chest and, with his sister's help, got the lid off the chest. A thought awoke inside his head telling him that the chest may be containing something interesting, just for the thought to vanish as he looked inside. "There's nothing interesting in here. Come on, let's go." But Jane seemed much more intrigued by the inside of the chest. Her eyes lit up as she dug though the items, stopping by every single one to examine it. "Look, Sam! It's Grandpa's old toys from when he was a kid! Look at this teddy bear, and, and... This football, and this... Map?" "Floraland? What kind of a country is that?" Sam examined the map as Jane stopped digging through the chest and, while wearing a headdress with a few missing feathers, looked over at the map in her brother's hands. "It's obviously a magic land! I mean, look at that castle!" She didn't seem that interested in the map as she grabbed a dragon mask from the chest and put it on Sam's head. "Look! You're a scary dragon!" She giggled, contrasting Sam's visible annoyance as he took off the mask and tuned to the chest. "How many times do I have to tell you not to be annoying?" "Fine." She sighed. "Hey, look at that broom! With these glasses it almost looks like a mad scientist! Come on, Sam. Can we play? Can we build a story?" Sam thought for a moment before finally giving up. The only way his sister would ever let him go was to do what she wanted from him, justifying his own curiosity about what the chest had hidden. "Fine, I'm a dragon. But only if this broom is a mad scientist!" "Okay then! In that case this bear is a pirate, this bunny is a knight and this squirrel is a superhero!" "And we're off to a quest to save the land after people took over and the mad scientist's experiments ruined it!" The two built the world and spent time thinking of the story for such a long time that they forgot the initial reason they came to the attic, only remembering it when Grandpa entered the room. "What are you kids doing here for so long? Wait, are those my old toys?" Ashamed, Sam proceeded to apologise for going through Grandpa's old possessions, but Grandpa wasn't showing any traces of anger. Instead he seemed to be glad that his toys weren't just collecting dust in the attic, alone and forgotten. "What are you playing? Can you tell me about it?" Jane couldn't contain her excitement and started talking: "So I'm a girl from a tribe in this forest and Sam is a dragon guarding this castle. One day strangers come and cut down the forest so we have to defeat the mad scientist who's using the wood to get electricity." "Then we go on a quest to banish them from our lands so they don't destroy what's left from the forest with the help of Super Squirrel, Knight Bunny and Pirate Bear." Sam followed up, just as excited. "We had plenty of adventures on the quest! We had to fix the railway crossing through the mountain so we could take a train through a tunnel in the mountains! There we found a village of dwarves who thought Sam was an evil dragon and attacked him, but while Knight Bunny and Pirate bear were defending Sam, Super Squirrel and I managed to convince them he was good. When we explained everything to them the dwarves gave us a strange gem and told us to throw it into the water once the mad scientist’s defeated." "Then we found a kingdom of flying lizards whose plants were dying because of the pollution. We promised them we’d save the land and they took us to the mad scientist’s lair and gave us binoculars so we could track him down. Finally, we got to the mad scientist and pretended to be a monster to scare him away!" "When we got back the land didn’t look any better. We thought we had no hope left when Sam remembered the gemstone the dwarves gave us. When we threw it into a nearby creek the grass became green again and the land was restored! The people responsible for the pollution left since they had no use of the land anymore." Grandpa listened to all that with interest and finally spoke after Sam and Jane finished. "I used to have all kinds of adventures as well! In fact, they're even documented in this photo album!" He turned the first page to find it filled with memories- photos of Grandpa, his family and his friends from ages ago. Grandpa playing football, Grandpa hugging Knight Bunny, Grandpa playing with the robot were only some of his adventures in the album. "Look, there's Pirate Bear!" Jane pointed to a photo of Grandpa not much older than her next to the teddy bear. And so he next few hours were spent in the family flipping through the photo album and looking at the memories an adventures. And so, a story was built. Even now Sam and Jane are always looking for new memories, ready to create stories. Prepared for adventures. 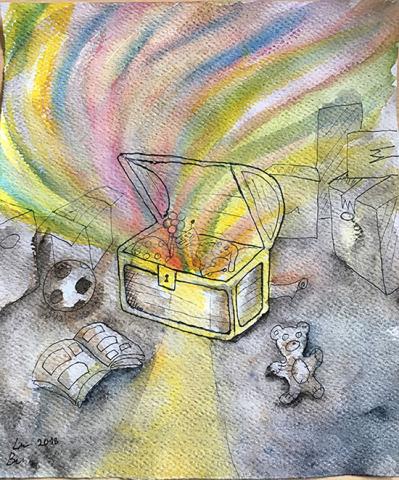