Once upon a time there was a small village at the foot of a hill that was known for its generous, loving and happy inhabitants. There wasn’t a person in the world that didn't hear a story about that town. It was surrounded by the most beautiful landscape and vegetation imaginable. The people of that town lived happily until one day an evil old scientist came to live in the castle at the top of the hill. One night people could hear strange noises and they could see lightings and flickering light coming through the windows of the castle. The mad scientist was doing strange experiments in his laboratory. The scientist was wearing a white coat and green gloves. He was mumbling to himself while his big eyes full of madness, messy white hair and wrinkled face were lit only by an object in front of him which seemed to be a light bulb. The lightings were going in all directions. The next day something odd started happening. The air was heavy and it was difficult to breathe. It was a cold and gloomy day with dark-grey clouds hanging in the sky. Day after day beautiful green trees and plants started fading and soon after completely died. The people were forced to cut down all the dead trees which they used for heating purposes since there was no sun in the sky anymore and it was very cold. All the animals that used to live in the forest ran away in search of a new home. The only animals that stayed in the village were a bear, a rabbit and a squirrel. They looked for shelter in their friends' house, a boy named Felix and his sister Loren. They lived only with their grandfather who was a good and honest man. One night he was sitting alone in the living room by the fireplace and looking at their family album from the time when all the people were happy and his children could play out in the open. He got so sad that he started crying. The children decided they would do something about this situation. They went in search of a map that leads to a magic wand. The only thing they took with them was a pair of binoculars. The boy took out his binoculars and saw an old house in ruins. He thought that the map might be there because his grandmother used to tell him a story about a map and a hidden magic wand. They came to an abandoned house where they found a chest full of toys and costumes. At the bottom of the chest there was a map they were looking for. It was an old chest difficult to open. The boy Felix tried to open it and it was too hard for him so his friend the bear stepped in and helped him. The map showed many things and places they needed to go to, to get clues which would lead them to the magic wand. There were many difficult traps before they came to their final step. According to the map the magic wand was hidden in the castle. They were dressed in different costumes because this was an undercover mission. Felix was dressed in a dragon costume which was quite scary. Loren was carrying an umbrella for protection and she was wearing a head-dress, made of beautiful feathers. The animals were dressed up as well. They bravely entered the castle where the mad scientist did his experiments and headed towards the place marked on the map. The scientist saw their shadows on the wall and got so frightened that he passed out. They found the magic wand and they used it to restore all the trees and plants that had died out. All the villagers immediately ran out of their houses full of happiness and delight, thanking the children for their bravery! The scientist was cast out from the village with a promise never to come back again!!! 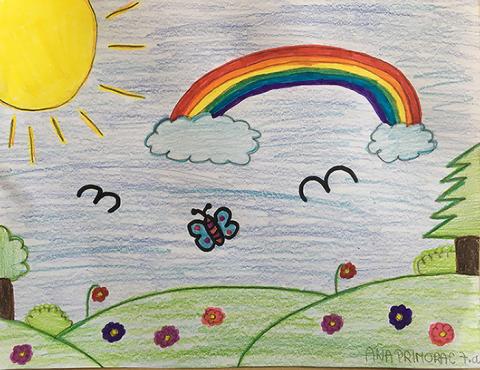