In a little town, near a big wood lived a boy named Jack. He lived with his parents and his little sister Emma. Jack and Emma were very playful and every day they went to the wood to play. Why there? Because there lived a witty bear called Ted who always made them laugh, a little white rabbit Oscar who was so cute, probably because of his size and a brave squirrel Olivia, she has always wanted to be a super squirrel. Life for them was easy and fun: just playing, listening to Ted’s jokes and Olivia’s stories about bravery and watching cute Oscar. Everything was great until something bad happened...

It was Monday like all the others, Jack and Emma woke up, had breakfast and then they went to the woods. But before they took off their father had shown them the photo album. In the album there were pictures of him as a child. They saw how he used to play in the wood where they play, too and he told them: "Always protect that wood,it means so much to me." After that they went away.

On the way to the wood they met Oscar, Olivia and Ted. They were worried and scared so Jack asked them what had happened. They told him that some people are cutting their wood. Jack immediately took the binoculars and look through them to see the wood, he was terrified and he couldn’t believe what he saw. Emma grabbed the binoculars to see what happened, when she looked she almost started crying. Everything that Oscar, Olivia and Ted said was true. Jack said that they would protect the wood as his father had told them to do, they would fight to the last moment!

When they came to the wood they saw a terrible scene: there were three big machines which were taking the trees away. There was also a fox who was crying because she lost her home. Then they realized that they really have to do something.

For the first time Emma and her brother came home with their wood friends. They went to the attic of the house. There was a big chest in the middle of the attic. Emma, Jack and their friends came to the chest and opened it. They found a lot of old things. They took some of that for the battle (Oliva dressed up as a supersquirrel, of course). They also found a very interesting map but they didn’t know what it meant. They thought a little and then Jack said : "Maybe my father knows what it means!" They quickly ran out to the yard and Emma screamed: "Daddy, look what we've found!" When she showed him the map he just said: "Ah, it’s a long story." But Emma didn’t give up: "Tell us daddy, please." After a while he gave in and started a story...

He told them about a man his age. His name was Henry. Even as a child he always wanted to explore space. His biggest wish was to go to the Moon. All his life he was trying to find a way how to do it . He knew everything about space and planets. Emma’s father and him were good friends until that flight... Well, how to put it, after he invented his first rocket that he tried to fly. But it wasn’t successful. He crashed. Everyone was laughing because he hadn't succeeded. He was ashamed. Every day they were teasing him. Emma’s father didn’t hang out with him anymore because if he did they would tease him, too. Henry was sad and angry and he swore that he would go to the Moon and then he would be gone, forever. But before that he showed Emma’s father a map. On the map there was  red cross and he said that he will fly from there. Emma and her friends recognized their wood. They realized why the wood was cut down.

They took a map and went to Henry. He was working in his lab. They entered the lab and attacked Henry. He was scared and asked what was happening. They told him that they would defeat him to protect their wood. He said: „I don’t want to fight with you, we can solve this calmly.“ Emma and her friends were suprised, they thought he was bad but he told them that he was just a poor sciencist who wasn't lucky and that they could make a deal if they wanted. They said yes, so the story finished well. They all went to the wood and they planted trees, after that Emma and her friends helped Henry to make his rocket. After a long time they succeed and Henry went to the Moon. He was so happy. Emma and her friends were happy, too because they had their wood again. 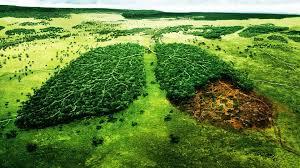