Not so long time ago, there was a scientist. He considered himself a genius, but nobody else accepted his ideas. Everyone thought he was crazy, and that it would be better for him if he stopped working as a scientist and went to hospital. Most of people called him „Doctor Hairless“ because he has never had a lot of hairs on his head, and the main reasons were his experiments. Doctor Hairless had a labaratory full of everything. He had books, newspapers, a lot of different liquids, some planets, too.

But one day he invented a bulb. Yes, I know that you think the bulb was invented by Nikola Tesla, but no - it was doctor Hairless who invented it. He was so happy about it that he was laughing all night long. When he showed his achievement to other people, they started liking him.

A few days later, doctor Hairless said he will need a lot of trees for his next project. The same morning, some trucks went to the woods and cut all trees there. What about animals who lived there? Nobody cared about them. All of them lost their homes, but only one brave fox decided to find help. The oldest owl in the forest gave him a map. The owl said: “ This will help you to find help. Good luck!“ The brave fox started the journey, hoping that he will find someone who can help them. After 4 long days of walking and sleepless nights, the fox finally found one group. That were a boy, a girl, a bear, a rabbit and a squirrel. As they saw him looking completely exhausted, they asked him what happened. After fox retold the whole story, they promised they will help him. First, they went to their home. Grandpa was sitting in his room, watching old memories with his grandchildren. They asked grandpa for help. He was thinking and thinking and he finally got an idea. His idea was to scare doctor Hairless so much that he will leave his labartory forever. Everyone agreed with grandpa's idea.

They all ran to the attic, and in the middle of it, they found a huge box. It was full of dust, but when they opened it, there was real treasure inside. A lot of costumes, masks, toys, flags ... Everyone took something from the box. The boy was a scary red dragon, the girl became an Indian, the bear was dressed up as a dangerous pirate who travelled across seven seas, the rabbit became a knight from the Middle ages, and the greatest hero was the fox who became a ninja from faraway China. They took the owl's map again and started their trip to doctor Hairless.

When they arrived, doctor was busy with his new project, but as they entered the labaratory, their shadows appeared on the wall. When the doctor saw that, he was so terrified, that the remaining hairs he had on his head, started falling off. He ran away from the labaratory and promised he will never come back again. The fox was really happy, he could invite all of his friends to a new home- to the saved forest. When they came there everyone wished them a warm welcome in a new home. Everyone was very proud of the fox. Day by day, month by month, they lived in happiness, without doctor Hairless and his deadly experiments. 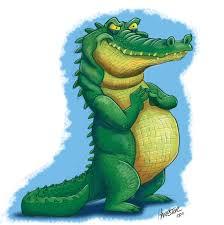