The story of treasure

The story of treasure This is the man who found an old book under his bed. His name is Adam and this is his story… One day, there were some friends there: a funny bear Ben, a beautiful girl Anna, her brother Luke, a rabbit Mike and a little squirrel Susan. One night, they came to Anna's uncle's laboratory, because they were looking for something. At first, Anna's uncle Jack thought that they were robbers, but later he heard Anna's voice and then he wanted to help them. They finally found what they were looking for and that was a map. That was the map of an unusual treasure. They went looking for the treasure. At first, Jack was there with them. First, they had to find a forest, but that was hard because some people cut down all of the trees. Little Susan was so sad because of that. Uncle Jack thought that it was sad when people hurt the nature and he decided to help his friends. He came back to his laboratory and did some experiments. Now, Susan, Ben, Anna, Luke and Mike were so happy because uncle Jack fixed the forest. The forest was so beautiful and special. The friends decided to go on a long journey to find the treasure. That was a long journey around the world. They met so many new friends, had so many troubles and good things, as well. Finally, they came to a red cross and started digging. The friends were so happy and excited because they found a big chest. It was time to open it and they did it. In the chest there were many toys and the friends were so happy. They were sad, too, because their adventure was over, but now they had so many toys to play with… 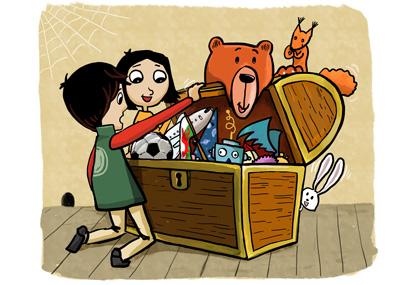