Yesterday I went to my grandfather's house. My grandmother died three months ago. So he is very sad and lately I've been visiting him very often. Anyhow, yesterday I visited him and when I entered the living room, he was watching a photo album.

I asked him: "Grandpa, who is this little boy in the photo?"

"Yes", my grandfather said, "Do you want me to tell you a story?"

And so he started...

"Once upon a time I lived in a little village called Triban. There was a little girl called Jenny, she was soooo pretty! In fact, I was in love with her (that little girl was your granny). We often played together. I lived next door to a crazy scientist called Mr. Greglins. One day there was a fire in his lab because he invented a light bulb that broguht back to life the ghosts of courage and adventure. Jenny and I were very scared and one day we heard someone knocking at my door. I opened it and saw a rabbit, a bear and a squirrel. They said that they ran away from their home because they were upset with their parents and they wanted to play with us. We all went upstairs and I opened an old chest. Inside, there were a lot of toys, but also a misterious map! There was an X drawn in the middle of the woods. We decided to go there.When we arrived at the signed spot, there were people cutting all the trees that were there. And our friends started crying. They said that over there, they had a home before they ran away. We needed to do something, so we ran home and dressed oureslves with scary costumes to chase away those evil men that were cuttig all the forest. And indeed, they ran away. We were very sad, so the day after we came back there to say goodbye to that naked field that once was a forest. To our surprise, we saw that all the trees were grown! The ghosts of courage and adventure did it! We were so happy that we all started singing a song while the sunset was making the moment even more special. Jenny and I kissed..and that is the end of the story."

"I know", said my grandfather, "and even today when I watch the sunset, I remember that beautiful evening in the magic forest." 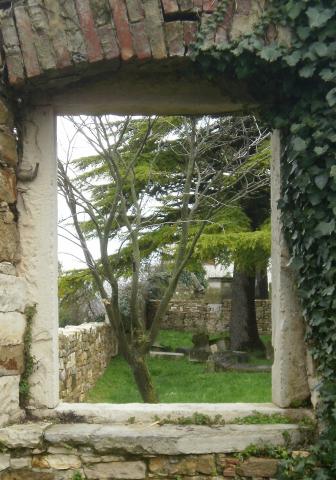