Once upon a time there was a crazy doctor who liked exploring and experimenting with anew things.

He had the idea of making a crazy treasure map. He wanted to rule the world.

The doctor used all his knowledge to create the map which showed where the treasure is buried.

But one day he lost that map and he was very angry. He was so angry that he broke everything in his

laboratory. One day while a brother and sister and their animals were exploring the nature they found his map and went for a treasure hunt.

Children and animals took their box with their costumes and dressed in them. The costumes are their amulets.

They wandered around in the nature and found a squirrel who was crying. They asked her why is she crying and she said she was crying because they cut down all the trees. They told her that they will take her with them if she helped them find the treasure. She agreed.

In search of treasure they took a lot of pictures to put in their memory album.

They were laughing and jumping in the forest.

After 40 years friends which searched the treasure gathered together again. While they were looking at their memory album, they remembered their happy childhood days. Because every good thing they did, their life was filled with happiness for the rest of their lives. 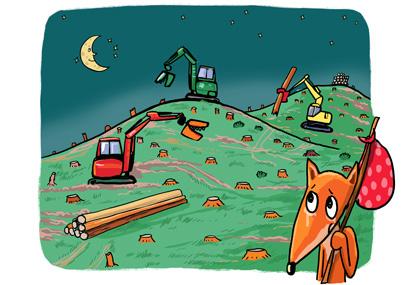