WATCH OUT - Friendship ahead!

Nowadays children play with their mobile phone or they watch cartoons but not Tony and Leona, although they live in town like other children they spend time out on fresh air playing pirates, Indians and dragon with their unusual friends bear Brundo, rabbit Zveko and little fox Cici.

One rainy afternoon Leona and Tony started to explore their house. They searched all house and when they started giving up there found an attic. The attic was hidden in the dark and with a lot of cobweb. In the corner there was a big box on which it was written  “WATCH OUT” . Leona and  Tony were very curious children and they opened the box. It was full of toys and on the bottom of the box was a map. In that moment grandpa entered on the attic and Tony took the map and hid it in the pocket. Grandpa then sat on the armchair to watch pictures of his grandchildren, while Leona and Tony went to room to view the map.

It had a red “x” and they thought it was a treasure map so they decided to follow instructions on the map. They first came to one beautiful meadow full of spring flowers, trees, interesting animals. It was the home of bear Brundo, rabbit Zvecko and a squirrel Cici. When they saw the meadow they couldn’t help themselves and they  started to play. They played hide and seek, danced, sang and had fun together.

Afterwards, they climbed a little hill to search for the “X” from the map with binoculars. The saw a little castle on another hill with X symbol and two different paths to the castle. The decided to separate to find the X. Squirrel Čiči went with Tony and bear and rabbit went with Leona. They did not know what was in the castle, but they went anyway. There were many tramps on the road made by a crazy scientist who was living in the castle. But children were smart and the scientist did not catch them in the tramps.

Children were sad when they saw it was done by the scientist and very angry when they saw that the scientist destroyed the beautiful meadow while they were looking for x. This was a home of their friend so they tried to fix the meadow and make it beautiful again. It was hard, but they did it. They built the fence made of tall trees so nobody can destroy it again and they could play as friends on this beautiful place.

They learned that friendship and helping  was important and that lot of beautiful things can be done when you work together with friends. Later they dug a hole in the ground and hid the map again so maybe other curious children can find it again. 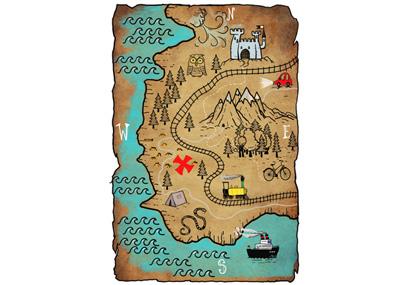