My Forest Adventure by Lana Kovač Oh, what is this? It is my old photo album. I haven't seen it for ages. I will have a look at it, I want to remind myself of the childhood. This boy in the picture is me when I was 12 years old. That was long, long time ago. Today I am a 72-year-old man. In this picture are my favourite football and my cat Felix, who unfortunately died ages ago. In this photo I was swinging on the swing in our garden. And this one...hm, this is my sister Ivy and me with our forest friends: the bear, the rabbit, the fox and the squirrel. I remember this adventure. I’m going to tell you a story. Everything began one day when my sister, our forest friends and I were playing and looking through the binoculars. We did it almost every day and we didn’t suspect at all about the adventure that was waiting for us. We expected to see the usual beautiful forest with all its tenants playing and having fun, eating and resting. We had been watching them for days and we didn’t think that it was going to be any different that day. But, instead of a beautiful forest we saw something terrible! – We saw a huge destruction. People with machines were chopping off the last branches of the trees. And the animals? Instead of playing or resting, the animals were collecting the remains of their homes. They were packing and moving out. They had nothing without the trees. Forest was giving them shelter where they played and found food. It was terrible seeing them leaving their homes. I felt terrible. I knew there was only one person who could destroy the forest like that – it was Dr Storm. He was a mad scientist. He couldn’t stand birds’ singing, rustling of leaves or seeing animals happy in the forest. He didn’t think that the forest was important, although he was a scientist and should have known that the trees produce oxygen every living thing needs for life. But, nothing mattered to him. The reason he was so reckless was that he had found a way to produce oxygen in one of his experiments, so he didn’t need the forest anymore. He destroyed the forest, I was so sure. I had to do something. Together with my sister Ivy and our forest friends, I made a plan. We had to sail across the big lake by boat, cross the field of giant snakes and a big snowy mountain. Behind the mountain there was Dr Storm’s old castle. We knew that Dr Storm was afraid of dragons, although everyone knew they didn’t actually exist. We decided that when we come to his castle, since it would be dark, we would stand in line in front of his window and we would make a shadow of a dragon. We made the whole plan and just needed to find the right costumes and devices to make horrible noise with. It didn’t take us long to find the necessary things. We went to our attic and opened the big old chest. In it there were our Halloween costumes, toys and bells – everything we needed. So, we put on our costumes, took the bells and went on our mission to save the forest. Being all dressed up it wasn’t strange that people were looking at us, but it didn’t bother us. We knew that the goal we were fighting for was worth it. I remember that I was dressed as a crocodile, my sister Ivy was an Indian, the bear was a pirate and the squirrel was in a Superman costume. The hardest and the most terrible part of the way was when we were crossing the field with huge snakes. But, somehow, step by step, we did it. The trip was long and we were exhausted, but when we came to Dr Storm’s castle our energy returned. We knew what the plan was, so we quietly stood in line in front of one of the downstairs windows. We managed to make a dragon shape with our shadows. We started shouting, ringing the bells, banging with pots and whistling. It really did sound like a real dragon was outside Dr Storm’s castle. He must have heard us, because in a few seconds he came to the downstairs room. He saw the dragon shape on his window and we could see horror in his eyes. It was obvious that he thought it was a real dragon who had come for him. He started crying and screaming that he would do anything just to be left alive. Then he suggested that he would leave the town which the dragon confirmed as the most important thing he had to do. That same night Dr Storm packed his most important things. The inventions and the furniture he left behind. He was in a hurry to leave because he thought that the dragon could change his mind and perhaps eat him. Ever since that night, nobody has heard of Dr Storm. In agreement with all the town’s inhabitants we decided that we would never let anyone destroy our forest again. We started planting the new trees, and soon they grew and became big and beautiful. All the animals returned to their homes and our forest was just as it used to be – a diversity of trees and animals and a perfect oasis of peace for the town people. This is how my forest adventure ends, but don’t forget – always fight for real, important and valuable things in life and never let anyone destroy your forest, because it is your home. 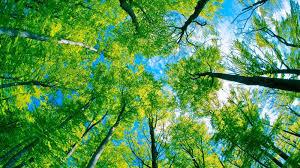