Once upon a time there were two siblings - a brother and a sister. It was Halloween, they were playing outside and found a quest. On the map it said:

"This map is a map for Halloween Quest,it's made for you for Halloween. Go where it takes you and you'll get the treasure."

FOR YOU FROM MUM AND DAD

They went to get their costumes and their pets.They had a fox ,a rabbit and a bear. All of them had their own costume.The girl was Indian, her brother was a dragon, the bear was a pirat, the fox was Batman and the rabbit was a knight. They left the house with a backpack,a broom,an umbrella and other things they thought they'll need.

The first and the nearest clue on the map was a crazy scientist's castle. They came in on their toes, as quiet as a mouse. The scientist was in the middle of an experiment. The kids and the animals were watching the experiment and looking around the room. The room was pretty small, with a model rocket and a solar system light. There was a big desk in the middle of the room. It had papers on it and a comfy looking chair next to the desk.

The crazy scientist saw their shadow that looked a lot alike a dragon with a king on it. He was scared and taught it's a Halloween wonder. They all went out from the shadow and introduced themselves. They said that they are here to find Halloween treasure. The crazy scientist had his doubts, but still he gave them a snapshot that their parents left.

On that picture, there was their grandpa looking at an album with a beautiful forest and a swing that he had sat on. They knew where the forest is and they looked at the Quest. There was a forest on the map, so they took all of their things including the snapshot and went to the beautiful forest.

Before going to the forest they went home and got changed, because they could not carry their costumes up the hill.

They climbed up the hill. The fox was meditating, the rabbit was digging out a hole, the girl was doing a cartwheel and the bear and the boy were dancing. It was already dark outside. The forest looked magical. There was pixie dust all over the forest because of Halloween party that was there before they came. In the hole that the rabbit dug up was an album. Everybody was curious and took a peek in. The fox told them she knows what it is. She said it's her album with photos she took while she was travelling around the world. She forgot about it. All the photos were nice, but one was sad. It shows her house that was wrecked. It was late, they had to go home and prepare for the next day.

They all took the backpacks and binoculars and went to the forest again. At the end of the grandpa's snapshot it said:

"Look from the highest point of the hill and you'll find what you are looking for."

When they came to the hill, the boy took the binoculars and saw a tree house.

They took the chest home, ate the candies, played with the toys and

lived happily ever after. 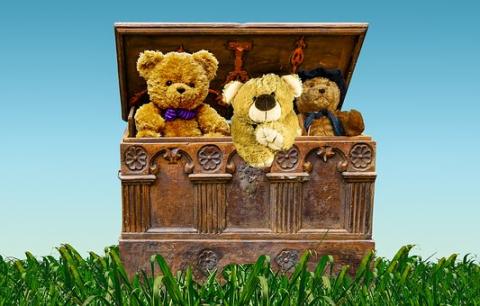