Mission: GREEN by Iva Ignajčić There was an old man called Richard. He had an interesting childhood, he was an adventurist. One day he asked his granddaughter Chloe to come. When she came she saw an old-looking photo book. She wondered what kind of photos were in it because that was the first time she saw it. –Well Chloe please sit down- grandfather told her – I want to tell you a fantastic story. Chloe sat down and started to listen to her grandfather’s words. Once upon a time there was a young man called Richard. Richard loved to spend days outside with his friends. He would often swing or play football. He had a cat named Nero. Richard lived near the biggest river in his town; some people thought that that river was as big as a sea but Richard didn’t believe them. He knew that it was impossible. One day while he was playing with his sister, a squirrel, a bunny, and a bear they heard some strange and horribly loud noise. He took binoculars to see what was happening. He was quite surprised by the sight. He saw some mean people cutting down trees and destroying the forest. He saw animals running from cold vehicles. As the time passed they kept on cutting down trees. It lasted for days. -Who was doing it? - Chloe asked her grandfather. -Don’t interrupt me while I’m telling you a story- grandfather replied. That was an evil doctor Live (he was named Live because Live spelled backwards is Evil, but he didn’t want people to know that he is evil). He was something of a mad scientist but he wasn’t really successful. He only built one small rocket. His laboratory was a real mess full of unpaid bills and broken light bulbs. He had a big model of the solar system too. -How would you describe him in only one word? - Chloe interrupted him again. -Chloe you are very boring! - grandfather continued to talk- If I need to describe him in only one word it would probably be insane or mad or crazy or something like that. - So where did I stop? - grandfather wondered – Oh, yes now I remember. In one of the broken light bulbs doctor Live somehow put a small amount of storm cloud so when he crashed the bulb against the tree or the ground it would make a big storm with rain, ice, thunders and lightning. Richard knew what to do. He brought a big chest full of balls, toys, robots and costumes so that they could dress up in heroes. They wanted to scare the evil doctor. Richard dressed up in a dragon with a magic broom (not really magic), the squirrel was Batman, the bear was a pirate, his sister was an Indian and the bunny was a knight. They had a map of their town. Doctor Live’s mansion was west of their town. It was marked with a big letter X. They went down the rails because it was the quickest way. They almost got run over by a train but the bear saved them. It was a long journey. They sang all day and they had a lot of fun. They met some new friends like Garry the owl and Larry the snake, who also joined them. Finally they got there. It really was a big mansion. It had seven floors and seven towers. It was more like a castle. It was twelve o'clock when they got in. They searched every room, tower and floor. They were looking for the evil doctor. Suddenly everything changed. It was like in a video game. Richard could feel the room change; there were strange shadows looking at him and threatening him. He realized he had to fight them, but he couldn’t see his friends anymore. He knew they were all in the same game. Just different levels. Dealing with the same hell. Just different devils. They fought till the end. And of course they won because they fought for the team and for the town, but not for themselves. They found doctor Live. He was just about to throw storm bulb. It was 1:30 a.m. The time seemed to pass slower and slower. They could hear their hearts beating. That was the moment when they needed to be the bravest, the best and not to be scared. They felt the energy building up in them giving them strength to destroy every storm bulb only by filling it with new electric energy. In a second everything was finished. Finally, the police came and arrested doctor Live and put him in jail. This was how they saved the forest. Richard was very happy. All of his friends were happy too. They danced, sang and enjoyed evening sun in the fresh grown forest. But how did the forest grown up so fast? Who knows. Maybe Richard’s broom actually was magical. We will never know. –Great story grandpa - Cleo admitted. –Was the broom really magical? - she wondered. – You need to find it out by yourself - grandfather answered mysteriously. 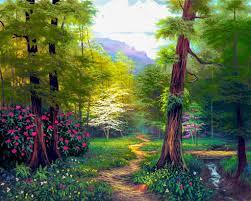