The Good and Bad

The Good and Bad

One quiet night an old man, who once was a curious little boy, found some memories from his childhood. He remembered the good old days, when he played soccer and spent his time in the open forest ground among the trees.

He remembered the tale about good and bad and the Mad Scientist who hurt his little friend, Steven the Squirrel. The Mad Scientist had some crazy ideas and he needed some kind of fuel for creating his ideas. His fuel was lots and lots of wood. Because he wanted to launch his rocket in the sky the local villagers helped him with his problem and got him lots of trees from a wood nearby.

They didn’t care for any consequences of destroying the natural habitat of animals and wanted only to see the rocket far away in the sky. After the Mad Scientist got his trees he continued his work on the rocket.

During that time, one curious boy and his four friends were playing with an old chest from the attic. Suddenly, they found a strange map. They thought that the map was old treasure map, so they went on an adventure.

The curious boy and his friends searched and searched for the gold under the X mark on the map. But, when they came to the marked spot the only thing they saw was the sad valley of chopped trees. Sad little Steven the Squirrel had his home among the branches of the cut trees, so he picked up what was left and walked away with his friends.

The great sadness hurt the other four friends and they decided to become superheroes and give a big lesson to the Mad Scientist and his friends who did harm to those trees and their friend. The dragon, the Indian, Batman Squirrel, Steel Bunny and Bear the Pirate went off to find the village of the Mad Scientist.

Finally, they found them all, the Mad Scientist and all the villagers, and scared them so they never thought to cut any of trees and remembered to water their plants every week!

After some time, new wood grew, Steven the Squirrel made his home where these five old friends could play and goof around every day, treasuring what they have. 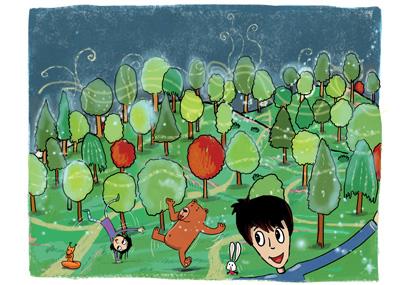