One quiet evening old Mr. Bill was sitting in his old chair with his old photo album in his hands. That photo album took him back in the past. He is looking at a picture with a beautiful forest which isn't here anymore.

In that forest he was spending lots of time playing with his best girlfriend Megan. He and Magan had three best friends from the forest. They were a bear, a rabbit and a squirrel. That forest was theirs in every way.

One day in the basement of Megan house, all five of them found an old suitcase with an old map in it.

That map was showing a way to the old castle with mad scientist Roy. Everyone was afraid of him because he was in crazy and mad job of strange science.

They have gone out with binoculars they took from the suitcase and there were watching that old castle with it. They all together made a choice that they will take the map and get going to the old castle to see scientist Roy to make sure that the story of the mad scientist is true.

Before they have made the trip, everyone has taken some object and they all have taken masks for disguising. Megan was an Indian girl with an umbrella in her hand. Bill was a dragon with broom in his hand. Bear was a pirat with binoculars in the one and with big spon in the other hand . Squirrel was Batman. And Rabbit was knight with armor and a toilet brush in his hand. They bravely went together without fear.

At that time in the castle, scientist Roy was in the middle of a new creation. He was so excited that he was blinded by it, without knowing what is happening around him.

Bill, Megan, Bear, Rabbit and Squirrel made a big shadow looking just like some kind of a monster. Showing on the door of laboratory and making that terrifying shadow, they made scientist Roy very scared. He jumped in the air and started running without stopping. Bill, Megan and all their forest friends were laughing when they saw that. It was the best adventure of their life.

Today, that forest is gone. The old castle and scientist Roy are gone. Bear, Rabbit and Squirrel are gone too. In the place of the forest will be a mall and some skyscraper. They are all gone but they are still very alive in old Mr. Bill's memories. 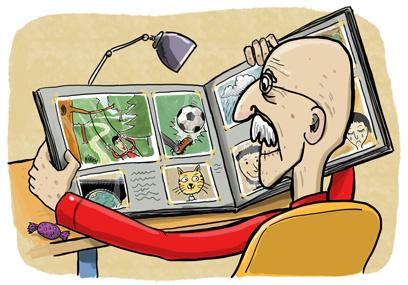