Memories, bittersweet memories... I've been looking at my childhood photo album for the last couple of days and it gives me the shivers when I think back to what it was like.

One day, my friend Kenzie and I were playing in the loft and we couldn't even imagine what we were about to find in an old chest.while we were playing with some toys, a rolled piece of paper fell out of a plane. We unrolled it to find out it was a map, but we couldn't make out what the map represented.

We remembered a person who might know how to explain it. That person was my dad. He was a scientist whose job often included the destruction of nature, which I never liked. As soon as my dad saw the map he got upset and started acting weird. He told us those were nuts and none of our business. We immediately knew there was something wrong because my dad rushed off to his lab. Kenzie and I sneaked to the door and started listening secretly to his conversation with himself. We heard him talk about destroying some forest. We somehow discovered where the forest was, so Kenzie and I set off for that place. As we got near, we saw through binoculars that some people were cutting the trees with the machines. We watched tree by tree disappearing.

At night, when the workers and the machiner were gone, the animals started coming oit and watched in utter despair at what was left of their homes. Our heart was breaking at that sight. We wondered if there was something we could do about it. It took us a while, but eventually we managed to come up with a plan. We knew that my dad was terribly afraid of monsters, so we decided to use it against him. We ran back home to see if there was something in the old chest that could be of use. To our luck, we found some great Haloween costumes. We even invited forest animals to join and help us in our brilliant plan. The animals said yes hoping to win their homes back.

That same evening my dad was in the forest. We knew he was going to pass by the school, so we waited for him there. All his life he believed in signs and thought that everything happened for a reason. While he was going back home with ground plans and sketches in his hands, our plan for saving the forest was about to start. Dressed up in scary costumes, we took flashlights, and making creepy sounds we scared the life out of my dad, so that he dropped all the ground plans and sketches and ran away in horror. When we realized our plan was actually working, we picked up the documents and tried to think what to do with them. Kenzie remembered that we could set them on fire so nobody could ever get the hold of them again.

When I came back home I saw my dad sitting in the corner of the sofa, frightened like never before. I asked him what was wrong and he told me with a tremble in his voice: "They are taking revenge on me!" I knew what he was talking about, but I still asked him to explain it to me. "It's high time for me to tell the truth because it would come to light sooner or later.", he said. Then he told me a story about his terrible childhood and about all the bad things he had been through as a child, which made him do evil things later in life. He promised me he would change and repented for every bad thing he had ever done.

As time went by, the forest was slowly renewing and was getting back its former glow. The animals came back to their old homes. As for Kenzie and me, we went to the forest every day to enjoy the magic of the forest. 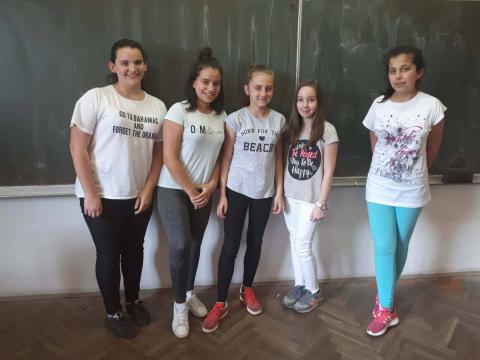