A dream according to your imagination

A DREAM ACCORDING TO YOUR IMAGINATION

Once upon a time, there was a boy who was very timid, but also a bit strange because he didn't behave like a child but more as a cartoon character. His great-grandfather was the one to blame for such a behaviour, but that you can't figure that out already in the beginning.

In one magical land where animals behave like people, and people behave nothing like normal people do, a forest is being exploited for virtual worlds. Trees are chopped down and the animal’s habitats are being destroyed. The wood is then inserted into a large disc that creates a virtual world by the imagination of the owner.

This squirrel you can see crying is Simmy. While he was still quite little he lost his parents and has no friends, and now even a place to live. The only thing he's got is a map his parents left him. His mother said to him that in any position on a map a chance for a happiness could be found, but he was little and he didn't get it. He even didn't know about the bad side of the map.

He headed to the big gray castle in which the wizard or better say spellbound, Roky lived. Roky was an orphan, and everyone made fun of him, but he was extraordinary. He felt that his light bulb brings good luck and he was so convinced until its dark magic turned him into an old man. The bulb was something quite different from what he previously thought, and the truth was found out two days before Simmy knocked at his door.

Roky took Simmy in. At first, he thought Simmy knows the truth about the virtual world for which he uses wood from the real world, so when h found out that Simmy came looking for help he put him in a light bulb because he wanted everyone to live by his rules. The possibility of getting out of the bulb was only by finding a forest of horrors, unfortunately, it appears and disappears every hour. Whoever was put in the light bulb was not able to get out, because of Roky’s ability to control time. Simmy in the light bulb has become a toy which only two children's pure hearts can revive. The time went by and Simmy has already spent one month in the box for toys where he met bear Sid and bunny Kim.

They were not able to talk because they were toys, but by using a single child's heart they could read each other's thoughts. Until one day…

A boy who finally got a sister, who's grown enough to play with him, opened the toy box. All the poor creatures came to life and boy Toby and his sister Lena decided to help Simmy, Sid and Kim escape from the light bulb.

Toby knew that he can come out if the light bulb if he finds a forest of horrors, but he also knew that it was impossible to find it and pass through it alive. There was another problem - the bunny couldn’t talk, and she knew about the exit by using weak points, so everybody went on a search for a magical flower that grows on the top of the transparent mountain. Kim explained that they must take binoculars and dress themselves up as characters from fairy tales. After a long preparation, they were off on a quest.

Sid has found a pathway of candy packaged in purple wrapper with blue polka dots, and Toby saw through binoculars that the pathway leads to the mountain. But there was one problem, they had to eat all the candy because otherwise, the pathway would disappear. Kim put one candy in her pocket. Their journey lasted 10 days because Roky was always setting traps and the weather was awful. It rained every afternoon and it snowed at night.

After such a long time they finally found the flower and Kim could save them now. They all disguised because Kim knew if they look like monsters, Roky will get scared and they will be able to escape. They somehow had to get to the poisonous snake who had to eat them, but they did not know the way. They were out of power and they even wanted to give up when someone remembered that Simmy has a path to snakes drawn on his map. Everyone was relieved, and they were back on the road. Magic flower guarded them against Roky for eight days and the other twelve days they had to hide in a purple tent, which was created by a magical flower.

In the corner of the map, it said that a tent should be placed three meters away from the snake's habitat. Everything was going according to the plan. The snake ate them and then they had to find the end of her body, which was not easy because it was twenty kilometers long and it took them a very long time. When they finally came to the end of the snake, Kim slit opened the snake+s body with her sword and they found themselves in a mean old Roky’s lab. They took the costumes off and transformed them into monster-like costumes. Roky was sleeping when they suddenly turned on the light and shadow created a monster. Roky screamed so loudly that the bulb exploded, and they were able to get out and live happily again. The forest was renewed when a light bulb made a big bang which destroyed a chip holding all plants, houses, mountains and everything else that Roky inserted in the disk. They were jumping for joy.

Suddenly, Tom's great-grandfather woke up from a coma in which he was exactly as many days as Kim, Simmy, Sid, Toby, and Lena were looking for a way out. As I’ve said at the beginning Tom behaved more like a cartoon character, because Tom WAS a cartoon character. Tom was actually Toby who was looking for a solution to save his family, and his great-grandfather was the Kim who took him to the right path. A proof is a purple candy wrapper with blue polka dots on the table. Tom’s great-grandfather still cherishes the memories of when he and his granddaughter were in a dream created by the imagination of his grandson Tom. 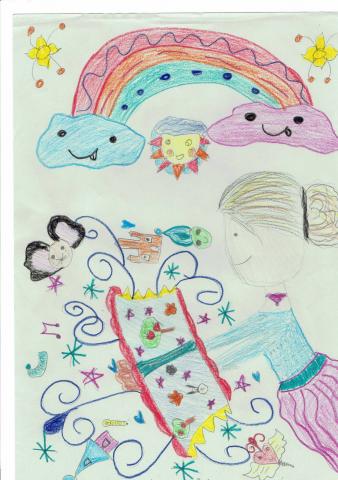