Kika is a small but playfull girl.She has always dreamt to be even smaller like an ant.Are you wandering why she wanted that?Well because she didn`t want to be seen or so that mom cannot see all her little mischiefs.Kika knew that there was a wizard and his name was Nino.Everybody thought that Nino`s house was haunted,but Kika wasn`t afraid of Nino.One time when her parents were not at home and they couldn`t stop her she went to Nino`s house.One moment she stopped and thought twice but after a few minutes she got into the house.When she entered she saw a lot of things, books were everywhere on the ground,dusty clothes were on chairs and the table was full of dirty dishes. While Kika was looking around the wizard Nino asked her what she was doing.Kika has never asked anyone for a favour so she told right away the reason why she is here namely she wanted to be even smaller almost shrunk by Nino.After hearing that Nino got angry and told her that he already had some problems with spoiled children.Kika wasn`t listening,she decided to do evertyhing alone, she took a book that looked the most interesting and ran out of Nino`s house.When it got dark she took the magic book and tried to create the magic of shrinking on her own.She was both scared and excited because she didn`t know how all this will finish.Slowly she started to whisper the magic words from the book.After that she felt something in her stomach and she started to shrink.Kika was suddenly very small,tiny like an ant and every object in the house seemed to be huge,to come from one object to another she needed more than five minutes.While she was enjoying her new tiny body wizard Nino didn`t know how to get the magic book back so that he can be the same wizard that he has always been.Meanwhile Kika was facing many problems,she was hungry but she couldn`t open the fridge and she had to run away from her cat.Kika was sad and finally she decided to apologise to Nino.She was dragging the big book along with her and thinking how Nino will not help her after everything she has done.After apologising to Nino there was no need for any magic words because as soon she said that she is sorry she came back to her normal size.Nino was not angry,he only said that she should be happy with herself and that words like please,sorry and thank you are the biggest magic that anyone can use. 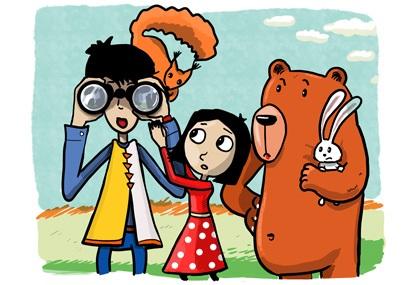