Save Trees to Save Life

Save Trees to Save Life by Vinko Šamukić Mr and Mrs Watson and their two children Steve and Jenny lived in a small, quiet village near Liverpool. Steve and Jenny liked nature and animals; they especially enjoyed running in the forest. Every day they spent their free time in the forest playing with their forest friends. In their neighbourhood lived Mr Tom Jacobs. He was known as a crazy scientist. He was a bad and cruel person. His dream was to have his own laboratory where he could work on his ideas. He planned to build it in the heart of the forest. Soon, he really did that. Nobody in the village knew what was happening there, there were only rumours about the experiments. One day, Steve heard strange and loud noises coming from the forest. He took his binoculars and looked around. He was shocked by what he saw – big machines were cutting down the trees. He felt worried about his forest friends, but he didn’t know what to do. The animals were also terrified, and one by one they left the forest. Steve and Jenny were very sad to see them leave. Suddenly, Jenny got an idea. They opened their toy box and agreed that they would use their toys to scare the crazy scientist. They called their forest friends to help them. It was night. They all put on their scary costumes, painted their faces, took the toys and went near the scientist’s house. They made unusual sounds and moved as a dangerous creature. Mr Jacobs thought that the ghosts of the forest animals came to catch him. He was so scared that he gave up his dream and stopped the machines in the forest. And that was the end of the crazy scientist. He moved away and no one heard of him to this day. Today Steve Watson lives with his wife and children in the same village near Liverpool. He often looks at his photos and remembers how he, his sister and the forest animals saved their forest. He is very proud because his children can also play in that forest and enjoy the fresh and clean air. 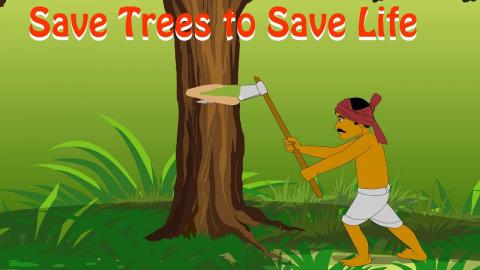