My Adventures When I Was Little

Hi, my name is Feb and I am 78 years old. Couple of days ago I found my album with pictures when I was little. I enjoyed looking at these pictures.

Then I found one picture. On that picture I'm with Octo, April, Octo's little sister May and my squirrel Augy at a carnival. I was the red dragon, Octo was the big bear, April was the indian girl, May was the rabbit with a sword and my squirrel was the batman. The coolest thing was we had dishes for parts of the costumes.

We went through our village.Then we came to the forest, I mean, what used to be the forest. When we saw the fox crying we asked her: ''What's going on?'' and her answer was: “Some people came and they just cut off all the trees“. We knew that something here smelled. Then we told her: “We will find the people who did that and stop them“. She accepted that and left. Just a few meters away we saw the so-called „Teeth“.

We also saw how one tooth went away so we went after him. While we were running, the tooth dropped a map with the information where it was going.

Then we came to the place where a Crazy Doctor lived. We came in his room for „operation“ and saw him how he did some experiments. He had a crazy face like a monster and above him was a book called „Experiments No.1“. When we saw that, were so angry beacuse he wanted to cut off all the trees in our village.

In his room for operation he had a lot of lights. We didn't want him to see us. But because of the light we saw our shadow. When he saw us, he was terrified because we had our costumes on: the dragon, the indian girl, the big bear, the rabbit with the sword and the little batman.

All his instruments dropped. But he didn't kidnap us or something like that, he just said: “Kids come with me“ and then I said: “Sure“, because I wanted to be important. He took us to the attic and showed us a chest with old stuff. The chest had: binoculars, a picture of Queen Elizabeth, old toys and much more. He gave us the binoculars and said: “Tomorrow, come to the roof of your house Feb and bring these binoculars. Then look to the forest“. We did that and what we saw was impressive.

The Forest came back to life with much more trees and then we saw the Crazy Doctor pointing to the book and we knew what that meant. He wanted to cut off all the trees so that even more trees could grow in our forest. We told that to our parents and they knew right away who the Doctor was. His name was Doctor March.

Then we went to my house, put our jackets on and ran to the new forest. We were happy to get our forest back. Yeah, yeah kids, this grandpa had a very funny childhood. 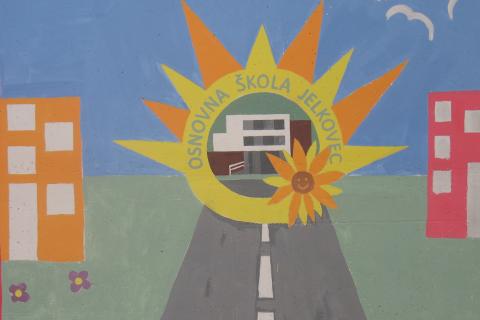