A Wish of the Shooting Star

A Wish of the Shooting Star

Hundreds of kilometres lower, Peter Parker couldn't sleep. He wasn't tired so he went to the living room. His grandfather James was sitting in the chair and looking at an old photo album. „Hi, grandpa.“ – said Peter. „Hi.“ - said James. „Why aren't you in bed?“ „Guess I couldn't sleep“ - said his grandson. James smiled and said: „If you can't sleep, maybe I should tell you a story.“

„When I was a little boy, I had lots of friends. My best friends were Slipper the Squirrel, Honey-Money the Bear and Shortear the Rabbit. And, of course, my very, very, very annoying sister Joanne.You know her, she lives accross the street. And, also, there was a bat, Screech, but he always slept. We always played in the forest. It was the most beautiful forest in the history of planet Earth. That forest was everything to us. We were there each and every day. So one Halloween we found costumes in some kind of an old chest and went trick or treating. I was dressed up as a dragon, Joanne went as an Indian, Slipper was a superhero, Honey-Money was a pirate and Shortear was a knight. As we were returning home, the wind blew a piece paper in our faces. It was a map! We very excited so we followed the map. We found some kind of a hut. It was really weird. It was definitly a hut, but it was made of metal. Joanne started running and before I could stop her she already knocked on the door. I started yelling at her so I couldn't see Slipper, Honey-Money and Shortear entering the hut. Then Joanne and I went in, too. We saw a crazy scientist screeming as we walked in. „Oh, you are just children. And animals. Didn't see that at first. I thought you were monsters. Because of costumes, right.“ he said. „Now come on, go home, you little worms.“ We were very suspicious of him so we stayed. „We aren't going anywhere. What are you doing? Show us.“ said Joanne. The scientist laughed: „Sure, I'll show you. But first, tell me something. What on this world do you love the most?“ It was a simple question for us. We were young and naive so we all said: „The forest.“ The scientist smiled horribly and said: „Here, let me show you. See this light bulb? It's magical.“ Honey-Money laughed:„Magical? Huh, according to your age, you were born in the 18th century. So, yeah, to you electricity is magic.“ The scientist looked at him very angrily and whispered: „Shut up, you freak. Like I said, it's magical. With this, I can destroy everything I want! Like, let me see, hm... Your little forest.“ I felt like he just said that he would kill my best friend.“

„It was too late when we realized our mistake. The next morning we ran out of our house even before breakfast. We were looking at the place which used to be our forest. However there was nothing there but some grass and destroyed trees. I took my pai of binoculars to look at it closely. „So Honey-Money“ said Slipper „do you believe in magic now?“ He was so sad that he took his stuff and disappered in a second. We never saw him again. Honey-Money also looked for another home. Shortear was so sad that he cried for two years and a month and he just died. Joanne and I slowly continued our lives. And here I am, old and ill, teling this sad story to my grandson.“

„Well, it is sad, grandpa.“ said Peter. „I wish we could get that forest back!“ As he was saying that, the shooting star was falling. And, what a miracle, the next morning, the forest was there, beutiful and strong like it was before she was destroyed.

And what about the shooting star? Like every shooting star before and after her, she fell into the ocean of wishes and drowned. But she wasn't sad. Her wish came true. She made someone happy. 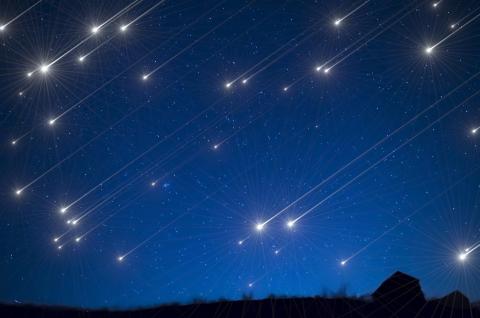