“There are a lot of stories and fairy tales about knights and princesses, dragons and wizards. But this one isn't like the ones you've heard before “says grandpa with a smile on his face.

“Well, what’s it about then?” asks Peter.

“It’s about the past. How I and my friends played long ago. Those where the good old days.”

It was long ago. When phones weren’t the only thing kids cared about. It was summer, a couple days after the school had ended. I decided that I would call some of my friends over, so we could play in the park. We were having fun, and everything was going great. Then, while we all sat under a big tree I got an idea.

“We should make our own story!” I said.

“We should make our own story!” I repeated.

“What do you mean?” asked Felix.

“We could get some toys and costumes and play out a story!”

“But…where would we get the things we need?” asked Ruby.

Then all of us got up and ran to Mark’s house. When we got there, Mark’s mom greeted us:

“Well hello there!” she said with a smile.

“Good day to you!” we all said together.

We went to Marks room and open the toy box. There were some wooden toys of animals, houses and people that he made in his spare time. Ruby and Felix took the boy and the girl figure while the rest of us decides to be animals. Jack was a bear, Mark was a squirrel and I was the rabbit. We even made a whole world around the characters with wooden trees and houses from the box. Like any story we needed a villain. So, we made up Bob. Bob was a normal farmer, but then, out of nowhere, some children destroyed his farm while playing tag and hide and seek. Bob was so angry that he decided to destroy the forest by his woodcutting machines to show the children what they did to him. And our quest was to save the forest which was magical because why not? So, we started our story like this:

“YEA!” everybody said at the same time.

So, the plan was to get some recourses and build a monster that will scare the scientist and will make us abled to disable the woodcutting machines Bob created.

“Riight…Where are we going to find the materials we need?” asked Ruby.

“Well, all the trees were taken by Bob, so we’ll need to go in to his lab and find where he keeps all the wood he gathers.” I said.

“But how will we put them together? We don’t have nails!” asked Mark.

“We’llcome up with something as we go.” I replied.

So, we went to Bob’s lab. It was easy to find the wood because it wasn’t in the factory, it was outside because Bob didn’t need the wood. We took the wood and ran as far as possible, so Bob wouldn’t see us. When we were far enough, we wanted to start putting everything together, but we didn’t have nails or anything. It took time, but we figured it out. We decided to be a part of our monster.We sat on the log and our shadow looked like a dragon.

And so, we went back to the lab. We climbed up to a window to a room in which was the scientist. Our shadow scared the scientist and he ran away. We went trough the window and in to the lab.

“Look! Over there!” said mark.

There was a huge panel in the corner of the room. Above it there were monitors that showed parts of the places there were once trees and forests. On the panel there was a giant button that said: „DESTROY ALL MACHINES”. We pressed it and then suddenly, all the machines outside exploded.

“Hello, children. You, with your bravery have saved our magical forest. For this I will reward you with anything you want.” Said the fairy.

All of us said our wishes and that’s where our story ended. We all agreed we should do this again. 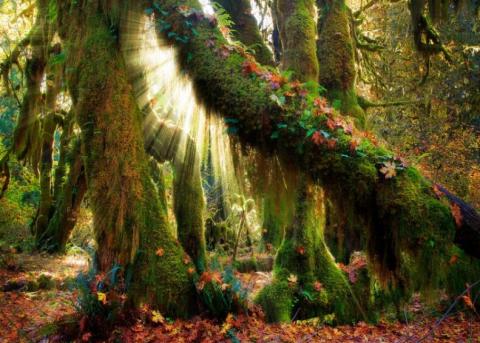