A spell of magic

One day a squirrel hears some strange sounds in her sleep. She wakes up frightened and sees some people and machines in her wood. Many trees are falling down, and the squirrel realises she needs to escape from her tree. She takes her things and leaves her home in a hurry.

Linda and Ron are best friends. They love animals and nature. While they are playing outside, they hear the same strange sounds and see a squirrel running away from the wood. The squirrel comes to them and says sadly, “I lost my home! Where will I now live?” After few seconds they see a bear and a rabbit coming from the wood. They look scared. The bear says, “I lost my home!” and adds, “I heard people talking about why they are cutting down all the trees.” “Why?” Ron screams. The bear answers angrily, “They want to build one building, a supermarket they call it.” The rabbit cries, “The supermarket is more important to them than animals and their homes!”

Ron feels sorry for the animals and invites them to his home. When Linda, Ron, and animals come to Ron’s house, he shows them an old chest. The chest is full of costumes and toys. Linda suggests trying on the costumes and playing with the toys. All the things are outside the chest, and at the bottom of it they find a map. They take the map and see a red cross on it. “That is the scientist’s house!” yells Ron. “We need to go there. Maybe he knows how to help us!” says Linda.

The children and the animals, with their costumes on, start their trip to the scientist’s house. After some time, they come to a big house. They go into it and see a scientist working. There is very little light in the room, and the scientist suddenly sees some scary shadows on the wall. He screams, “Who are you? What do you want from me?” The friends come closer, and they say to him, “We want to talk to you. We have a problem.” They tell everything to the scientist and ask him if he can help them. When he hears their story, he says, “I can create a spell of magic and it will make the past disappear.” The squirrel asks him, “But what does that mean?” “It means that people will forget their idea of destroying your wood,” he answers.

The scientist creates and casts a spell, and the wood is there again. The animals can go back to their homes, and they are all very excited. The friends can now play together in the wood. Ron and Linda are happy because people decide to build the supermarket in the city. The animals will never have to leave their homes.

Many years later, Ron opens his photo album and sees a photo of him in the wood. He remembers his friends and the scientist who helped them. He remembers the man who used his magic spell to bring back the wood. He says to himself, “We can build a better world with people like the scientist. It is important to save the woods. If we save the woods, we will also save animals and our home, the Earth!” 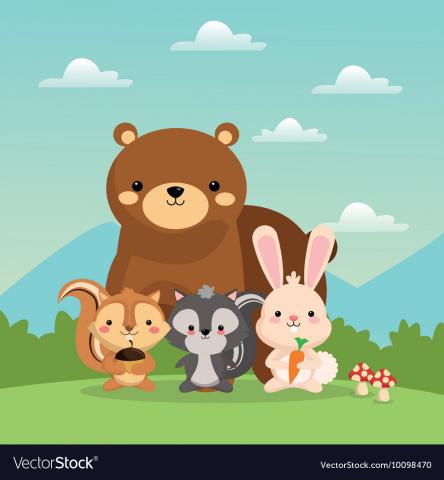