Guardians of the woods

Once upon a time there was a small town surrounded by nature. It was the middle of the spring. Every day was filed with flying bugs, bird noises and beautiful flowers. In the centre, in the heart of the town, there was a little wooden house owned by an old man named David. He was bald, with white moustache and he had round glasses on his big nose. To him every day was just another boring day because he lived alone and had no one to talk to. One day he decided to clean the attic. In the middle of cleaning he found a big treasure chest full of old books and photo albums. He decided to make himself a warm cup of tea and look through his founds. After a few hours of reading books he noticed an old photo album with all of his childhood memories.

When he turned the first page, a big smile immediately illuminated his face. He leaned back in his rocking chair, closed his eyes and one special story came to his mind. That story was about him and his friends when they were kids, called Guardians of the woods and it goes like this... One day, many years ago, little David was playing in his yard when he heard voices from the bushes. He was curious so he went through the bushes and found brown bear Joe, white rabbit Noah and squirrel Finn. He asked them what was wrong and they told him about Mr. Foster destroying the woods and forcing animals to leave their homes. Mr. Foster was crazy scientist who thought that he could use Mother Nature for crazy experiments which would bring him big money. David, Joe, Noah and Finn ran to David's friend Zoe to tell her bad news. Zoe was a little girl with black hair and great character. Rabbit Noah showed them a map of the whole city and placed an "X" on destroyed part of the woods. They went there and watched from the distance crying animals that were leaving their homes. Zoe said that they had to stop Mr. Foster before he makes more damage but she didn't know how to do it. After a while they came up with a brilliant plan. David remembered his treasure chest filled up with Halloween costumes and toys in the attic of his house. Everyone grabbed a costume and a weapon. David was a dragon with a broom, Zoe was an Indian with an umbrella, Joe was a pirate with a kitchen spoon, Noah was a warrior with a toilet brush and Finn was Batman. They were ready to go. Following the map, they found Mr. Foster's house. They sneaked in and heard a voice coming from the basement. It was Mr. Foster in his lab trying to make energy with thunders. It was very loud and scary but brave Guardians stood in front of the light and made a shadow with their costumes and weapons that looked like a scary monster. When he saw the shadow, Mr. Foster screamed as loud as a thunder and asked the monster to let him go. Guardians promised him to let him go if he called all his workers to stop destroying woods and disapeared from their town forever. Mr. Foster quickly called workers to stop everything they were doing, packed his stuff and moved away forever. As the time was passing by, the woods grew again and all the animals had their homes back. The whole town congratulated the Guardians of the woods for saving lives and declared them true heroes. Old David opened his eyes and his face was full of tears of joy. For a few minutes, he was thinking about how important it is for people to keep everything around them safe for themselves and generations to come so they colud experience everything we have experienced. He smiled again, took the album and placed it on the shelf right by the pictures of his best friends for life, Guardians of the woods. 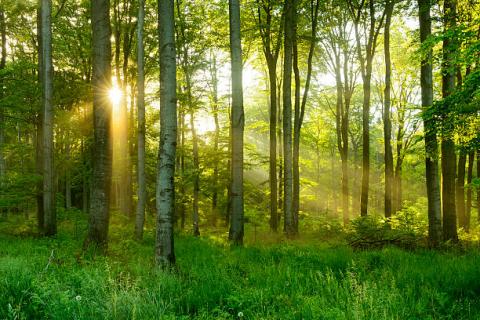