One day Mr Green was at home looking at his childhood family photos. In the album, he saw one picture that reminded him of an adventure that he had with his friends.
The adventure began when he was playing with his friends Lucy and the bear Benny. They were in the attic with their pets, a rabbit and the squirrel trawling through an old box filled with old Halloween costumes when they spotted something that looked like an old map. They never saw it before, so they were astonished to see it there. Friends spread out the map and saw that the path leads to the castle through the forest and high mountains.  At the end of the way, there was a large castle. They were curious, so they decided to set off on a journey. The first night they slept in a tent and had to kill a snake, which crawled into the tent. The next morning they came to the thick and beautiful forest. They stayed there for a while to play there and enjoy. They had a great time while they were there. The next obstacle was the high mountain, but when they came closer, they realised that it would take them ages to climb it. They were disappointed and even wanted to go back, but suddenly they heard the train coming. It was the train passing by the castle. After some time, the train stopped near it. They were surprised when they could freely enter the castle through the main gate. When they climbed the stairs, they saw a light in one of the rooms. They found themselves in a big laboratory. There was a strange man who was working on some experiments. He politely welcomed them, show them the laboratory and said that he is happy that someone is interested in his work. They did not know that he was only pretending, but they had a feeling that something is not right and that he was working on something bad. The scientist invited them to stay overnight and they accepted. He told them that he is doing experiments in the forest. The following day, the scientist said that he is busy and that they need to leave. When they were leaving, he looked very excited and obviously wanted to get rid of them. On the way back, they followed the same route, but when they come to the place where the forest should be, they stopped puzzled. All the trees were cut down and they realized that the crazy scientist destroyed the forest. They were angry and decided to go back in disguise because they did not want the scientist to recognize them or harm them. But he was not in the castle. They searched the laboratory and found the liquid which could make the trees grow again. They took it and ran away with it. Therefore, the forest was alive again. Noone has ever heard about the strange scientist after that day.
When they finally came home they were really excited and happy because they saved the forest. They liked to spend the time in the magical forest and playing while wearing their old costumes. This adventure was retold many times among his friends. 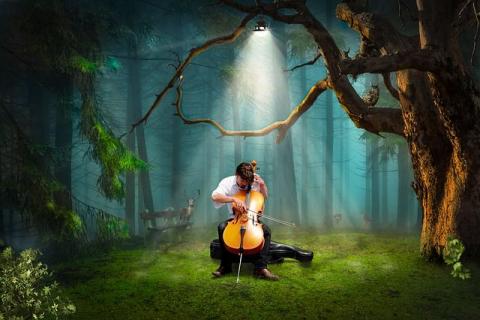