The Friends of the Forest

It was summer. The days were hot and beautiful. Every day Charlie and Sara were playing in the forest with their forest friends. Hide and Seek or some other game, it didn't matter, it was just important that they were together. One day it started to rain. Children were unhappy. They wondered what to do. Suddenly it started to snow and then it became foggy. But in the end, there was no electricity. The children went to the house of Professor and Scientist Mr. Connor.

„Oh, I did not see you coming. I'm working on a new scientific project with a bulb. It takes a lot of electrical energy to do it. What brings you here? What's happened?”-asked Mr. Connor.

„Mr. Connor, we don't have electricity. We thought you know something about it.” - said Sara.

Two hours later Mr. Connor managed to fix it. But then it was night and children did not go back to the forest. The next morning children headed there, but there was no forest.

Charlie looked through the binoculars and saw excavator trucks demolish the forest.

Grandpa knew what was going on and he was watching the album with pictures from the time when he was a boy playing in the woods.

„They are going to make a market-place there.”- said grandpa Brian.

„Good morning! I've found a treasure map. I made it with my friends when we were kids.” - said Mr. Connor.

„Treasure map! We are going on a search!”

The bear was a pirate, Charlie was a dragon, Sara was an Indian, the rabbit was a knight and the squirrel was a batman. They went to Mr. Connor wearing those costumes.

They took the map and went on a treasure hunt. The trip was very interesting. They were wondering what was in the chest.

„We have passed the railway.”- said Sara.

The bear started to jump but felt that the ground was soft. He began to dig, and he saw the treasure. They carried the chest home. The chest was very heavy. At the top of the chest, there was a lock. Charlie took the key and slowly opened the chest. They all opened the chest together. There were a lot of toys in the chest but there was a card at the top. It was a magic card that fulfilled one wish. And they all had the same wish - to return the forest to all its residents and, of course, to friends who played there.

The wish came true and the forest was there again, beautiful and green and full of animals. 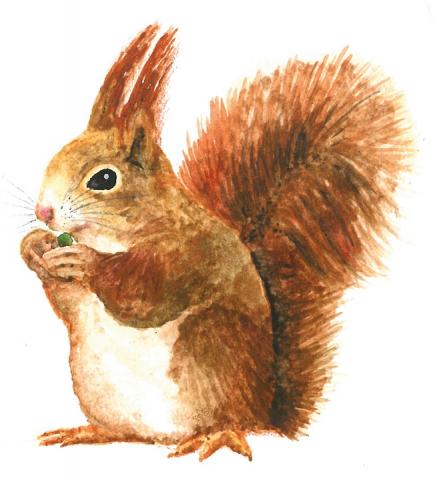