The Rise of the Artefact

Once upon a particular time, two kids found a box full of glowing plush toys. Then some of the toys came to life. The kids and the plush toys played hide and seek all day!

As they were playing they found magical binoculars. They looked through the binoculars and saw an old cottage.

They went into the little house and saw Dr Wong holding a weird looking map. They asked him if they can keep it. He said that only pure-hearted ones can take the map of the ancients. Still they tried to take the map but no one succeeded except the bear called Tristan.

The kids and the plush toys followed the bear Tristan and came to a forest of magical self-cutting trees. There they saw a really depressed fox that was sad because the trees were all tired of cutting themselves down and growing again.

The kids and the plush toys helped the trees rest by giving every tree a relaxing hour in the spa and a free massage. When the trees recuperated, they started cutting themselves and growing again.

The trees and the fox thanked the kids and the plush toys and gave them a gift - “the wand of eternal growth”. The party happily accepted. By using the wand, they fixed all the World’s mistakes except one: The Scientists of Unstoppable Evil. The evil scientists made monster animal machines whose purpose was to eliminate every good thing in the known Universe. The friends wanted to stop them - but how?

They dressed up in costumes so they wouldn’t be recognised, and walked in to their lab, where they saw a weird-looking waffle machine.

They tried to use it but there was an old human reading a book of memories next to it. They knew that the book was an ancient relic that was probably stolen from the Whispering Hollows - a place where all relics of such sort are kept. Then the kids and the plush toys heard evil laughter.

Together they went to a dark room filled with evil emotions. One of the evil scientists saw them and became very angry at them because he didn’t want them to spoil his plans. There the party found the Blue Crystal of Gleam and Scream. They touched the crystal together and summoned an animal that could defeat the evil scientists. The summoned animal immediately scared the evil guys away. Then the kids and the plush toys brought all the artefacts back to the Whispering Hollows. When returned to Whispering Hollows, the artefacts combined power made the World a better place with lots of smiles and fantastic imagination. The guardian dragon Slick said that the kids and the plush toys did a great job and rewarded them with a playground for them to play every day and a life supply of pierogi. The kids and the plush toys had many more exciting adventures but those are stories for another time. 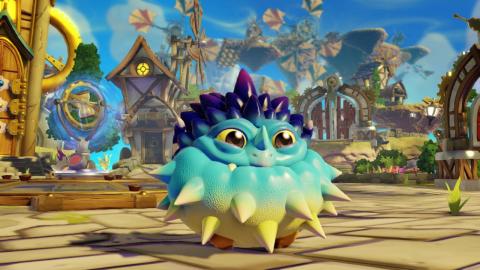