“Once upon… ha.. ha... a time… ha… ha...  this cat looks really funny in this dress .. ha ha...”, says grandpa to his grandson.  “I'm sorry what was I saying? Oh yes, thanks... Once upon a time in a big town brother Billy, and sister Lilly, and their three friends: bunny called Ronnie, bear Double B, and squirrel Poppy played at their grandparents attic…”

"Hey, guys look at this!" said Billy. Lilly and friends heard Billy, and when they turned around to find him, they saw a big wooden box in the corner of the room. Billy opened the box and saw a lot of grandparents’ old  toys. He started removing toys from the top and found a map. "I knew that all those James Bond films will teach me something" said Billy, but nobody heard him because Ronnie took a map and they all teleported to Magical Abandoned Great Illusion Creepy Forest, in short –M.A.G.I.C. forest. Forest was so pretty that they forgot about mystery map and started playing.

When the night came they all fell asleep. “Guys look at this”, said Billy when he woke up. When others opened their eyes they were all shocked. Forest was ruined. The trees were cut down, all the magic disappeared and even the little animals that lived in the forest ran away. They were so sad, that Poppy even started crying. While Ronnie was thinking about how great the forest was, he saw somebody sitting on a bench. He took the map and slowly started walking to that person. When he got close to it, he saw that the person sitting on the bench was a crying fox. He was sad because he lost his home. Ronnie asked how he can help, and the fox said:

Who wants to help the meat-eater is the right person for this task,

Give him the binoculars and you will see,

He and his friends will save the world full of mysteries!

After he said that, he gave the binoculars to Ronnie and disappeared. Ronnie looked through the binoculars and behind the stone he saw some costumes. Later  he came back to his friends with hands full of costumes, he didn't want to explain where he got them because now he was a hero and he needed to save the world! Billy now wasn’t a boy, he was a dragon, Lilly wasn’t an ordinary girl she was a Native American girl with umbrella; bear wasn’t a bear, he was ARRRR a pirate. Poppy was a really cool Batman and Ronnie a knight! And now when they were ready they put the map on the ground to see it better and then Lilly saw, written in small red letters in the corner of the map:

You are the red cross, and the Evil is in the castle...

They knew what to do. They started running faster than a cheetah. First they jumped above cut trees, than they followed rails through dark forest. In the end, a giant owl started hunting them. They hid in the strange red car. Suddenly, the car started driving and in three hours they found themselves in front of a big spooky castle. They didn't know how to enter the castle, but they knew that they can't stop now, because they are so close to saving the world. Double B got an idea. He will knock on the door and when somebody opens the door (they don't know who will open the door because everyone calls him or she the Evil) Poppy will sneak through the door and when that person goes away, she will open the door for others. Everything happened the way the bear said. When they knocked on the door, and the door opened, there was nobody else there other than Evil Doctor Lightning. Everything went according to the plan, except they didn't know what to do once they were inside the castle. Now Lilly took the lead, and everyone followed her. When they were in front of the scientist’s office they all got together, still wearing strange costumes, and they struck a pose, now looking like some strange monsters. They jumped in front of the scientist and scared him to death: BOOO! He was so scared that he fell on the floor. But still he was so powerful with his light bulb that the only way they could defeat him was to turn off the power. Billy jumped on Double B, Lilly jumped on Billy, Ronnie jumped on Lilly, and Poppy jumped from Ronnie on to the switch that turned off the power. “You can't defeat me... I will rule the worldddd!” said the scientist.

And they lived happily ever after.

"Grandpa is that really the real ending?" asked the boy.

"I'm just kidding... and then a big fluffy unicorn came and destroy the other half of the kingdom!"

"You'll never know the ending, because after all, this is the mystery world that needs to be explored..."  said Grandpa and closed the book. 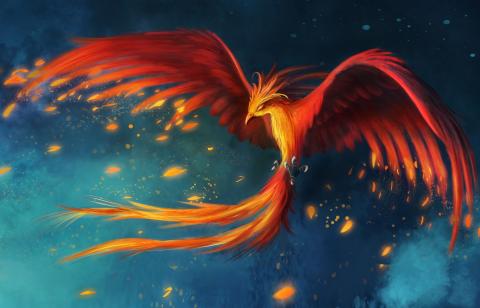