On a beautiful sunny spring day in an old village on a green island an old man named John is sitting in his chair and looking at his garden. He takes his dusty old photo album and starts looking at the old pictures. His childhood was very interesting and full of adventures. He was interested in Astronomy and Science from an early age. Looking at the photo in the album he remembered an event with an evil scientist. His name was Spooky Franky.

He brought a lot of machines that were destroying all trees and plants on the biggest hill of the green island. Bears, foxes and many other poor animals lost their homes and had to find another place to live.

John and Sandy were playing outside on the hill and they ran into the animals who lost their homes in the beautiful nature. Together with the bear, the squirrel and the rabbit, they wanted to find out who destroyed the animals' homes.

John, Sandy, and the animal trio from the hill decided to find something among the old toys in the little old house that would help them in search of that evil person. Under the toys, at the bottom of a big old box they found a wrinkled piece of paper.

John, Sandy and the animals made costumes which would scare away the evil man and make him stop doing bad things. They saw a smoke coming out of the castle on the hill and they hurried up to get there.

The animals were thankful to Sandy and John and invited them to their new garden. There they played together and looked around animals’ new home.

Now the animals have their new and cosy home where they can live safely. 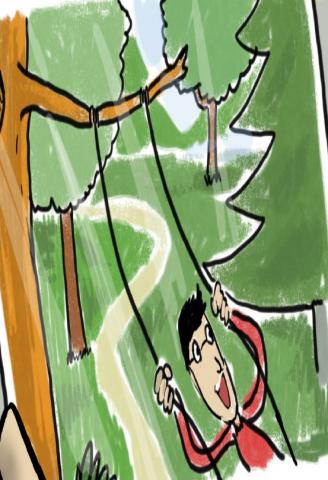