Hi. I'm John. I have a sister and two loving parents. We all live in the same cluttered house. The house is very homey and very small. It's also known for the forest that it’s close to. For many years there were all sorts of stories about that forest: people being kidnapped, scary creatures roaming about… The most popular of them all was the monster story. People described it as an animal with wings and sharp teeth. There were many things inspired by the monster, such as costumes, treats and even a movie.

My days around here were always pretty much the same, until one day something strange happened. We just got home from school and we were waiting for lunch. After I put my bag on the table and did my homework, I went outside to play with my sister. We were there for exactly 5 minutes when we heard strange noises from the town. We rushed to see what was happening. When we got there, we were shocked. The town was a mess. There were animals on the street, people running around, shops destroyed. After some time, my sister and I realised something. The animals weren't running around aimlessly, they were running from something. Our town’s famous forest was almost gone. The animals were confused and came to the town.

After some time spent asking around what was happening in the forest, someone finally told us. Since our town was very small and poor we didn't have fancy things around here. We had a few shops, a school, a hospital, the basics. We had an abandoned office in our town where a few weeks before a scientist had moved in. He wasn't very successful in his business and he wanted to make something big. He came to our town for some inspiration. One day he got an idea. He decided to make a lightbulb, but not just any. He wanted to make one that doesn't require electricity. That was supposed to make our town at least a little bit fancier then it was. The scientist came up with a plan, but he needed a better laboratory. After days of searching he found a place. He wanted to put the laboratory in the forest. He needed to ask our mayor for permission to build it. He went to the mayor's office the next day. After he explained everything, the mayor agreed. My sister and I hated the idea, and with this animal chaos, it turned out we were right.

Angered by what was going on in the town, we rushed home. We had a big chest on our attic with old costumes in it. My idea was to scare the scientist. We would make a big costume out of smaller ones, into which both of us would fit. We would make the forest's monster costume.

After we were done with the costume, we devised a plan how to get into the scientist’s laboratory. We would go there late at night and get in through the back door because nobody knew about that entrance except for my sister and me. After we got in, we found his office and hid there until morning. When the scientist came, we waited for an hour more. My sister and I finally got the courage to scare him. We managed to do that too. He was so scared that he went to the mayor's office and told him that he was leaving the forest, although half of it was already gone. The scientist never came to our town again. We went home and celebrated.

Years have passed. The trees have grown and the forest is whole again. The monster of the forest is no longer just a creature that scares people, it is the hero of the town. 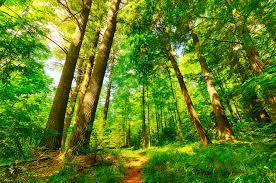