Image 1:
In a small town lived a man named Bailey. He was sent a strange map. He looked at the map and saw tiny letters that said: “Bailey, I need your help. My world is falling apart. The trees are being cut down and the animals don’t have homes anymore. Children are made evil. I need you to come to my land called "Happiness" and help me save those children and animals. I'll tell you the rest of the details when you arrive. Find the location on this map, take the marked boat and I will do the rest." The letter was signed with doctor Timon.

At first, Bailey didn't know what to do, but then he decided to visit the mysterious location. He started preparing for the journey. Meanwhile, Bailey's beloved wife and son contracted a strange disease and passed away the very next morning. Bailey was so devastated he postponed his planes and fell into a severe depression. His life slowly withered away as he became weaker and weaker.

Ten years passed, and Bailey was lost in his misery. He got so ill, he avoided talking to people. He knew his end was near. The doctors gave him one more year to live.

One day, Bailey was looking through his old family album and remembering his happy days when he saw the photo of his late wife and son. It seemed as their lips were moving: “Stay strong, go to that land and help people who need you, don’t cry anymore and be happy.”

He wasn't sure what happened, but he made a decision. He would visit the mystery land from the map. He gathered all his strength, and only few days later, he started his journey. He followed the directions from the map and found the boat which was amazingly still there. There he met the captain of the boat. He asked if he could board it, and the captain agreed. They started sailing. The captain looked mysterious. Suddenly, they saw a mermaid called Diamond. The mermaid said she had been waiting for him for a long time. She also claimed she knew doctor Timon. The mermaid led them further. An hour later she showed them a secret destination where a sea snake lived. The snake approached Bailey and whispered a password into his ear. The password was "Treasure". Upon telling him the password, the snake disappeared.

Soon enough, the boat approached a strange land with huge doors. Bailey remembered the password and entered through the secret passage. He found the land called "Happiness". To his surprise, even if outside was dark, there was morning in "Happiness". He stepped further into that strange land and saw kids and animals with the masks who were going to the carnival. He approached them and asked how come their land was sunny even if there was a night outside. The kids said that there was always daytime in "Happiness" because darkness would destroy them all. Bailey asked about doctor Timon, and the kids showed him a way to a small house.

He went in and saw the Doctor who was doing a strange experiment with a light bulb. He turned around and saw Bailey. He smiled and hugged him. They started to talk and the doctor said that he had an evil twin brother Simon who made another land, started kidnapping kids to make them evil with a special potion. That land was called "Misery". Bailey and doctor went there to search those missing kids.

"Misery" was awful. Kids appeared really miserable, they were working on dark fields. They had red eyes and looked really evil, but Bailey knew it was from the potion that Simon gave them. However, they knew Simon was terrified of one thing, and that thing was a dragon.

They quickly made a dragon mask and went to see Simon. The evil doctor was scared at first, but then he recognised his brother. He attacked Timon with a poisonous weapon, but suddenly Bailey stood between them and took the impact. Simon looked into Bailey's eyes and saw he had nothing to lose. Then, Bailey collapsed. Timon took his chance and captured his evil brother who was still looking at Bailey. Simon tried to run away, but Timon was so angry he managed to win.

Doctor Timon returned to Bailey who was still lying on the floor. He tried to help him, but couldn't. The good doctor started to cry, but Bailey told him to save the kids so his death wouldn't be in vain. Timon decided to listen to his friend. He developed an antidote and gave it to the evil kids. Their eyes became normal again. The kids ran back to "Happiness". They felt happy again and found animals to play.

The years passed and the kids never grew up. One day, they found a box with a photo of a man. It was Bailey. They asked doctor Timon who that man was. Timon said it was Bailey, the hero of "Happiness". 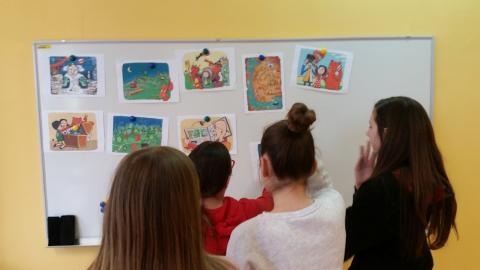