Magical forest and the crazy scientist

The boy and the girl were with their grandfather in the small house near the destroyed woods. The grandfather was obsessed with old photos.

He told a story about magic forest. He started talking: ”That was 50 years  ago, when I was a little boy like you. There was a magical forest near my house. There was a lot of pollen in the forest.”

Then he started a story about an allergic scientist. He said: “My friend was allergic to pollen so he hated magical forest. He was taking a lot of pills and syrups to stop allergy but it didn’t help. All those pills eventually made him crazy.”

Grandfather stopped talking. After a few minutes he continued: “He cut down the trees and lot of animals lost their homes. It was horrible!” The old man started crying.

The kids didn’t believe him but then animals came and told them the same story. The scientist really DID destroy everything! The kids went to explore.

They had nothing to fight off the evil scientist, but then they had an idea. They could surprise him by pretending they're someone really scary! They found some costumes on the loft to scare the scientist.

They put on costumes and walked to the scientist’s lab. The animals were by their side.

Both kids and animals did their best! They scared the scientist and he promised that he will renew magical forest and apologize to all people and animals.

The forest has been renewed and animals came back. Every weekend all people from village went to the beautiful magical forest. 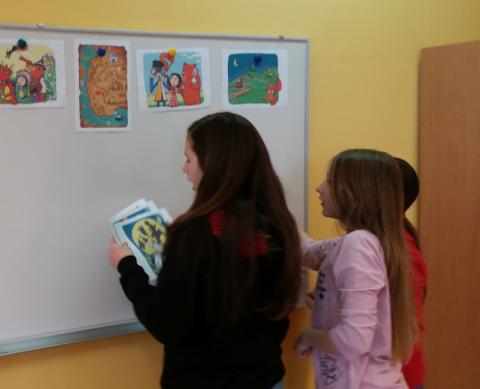